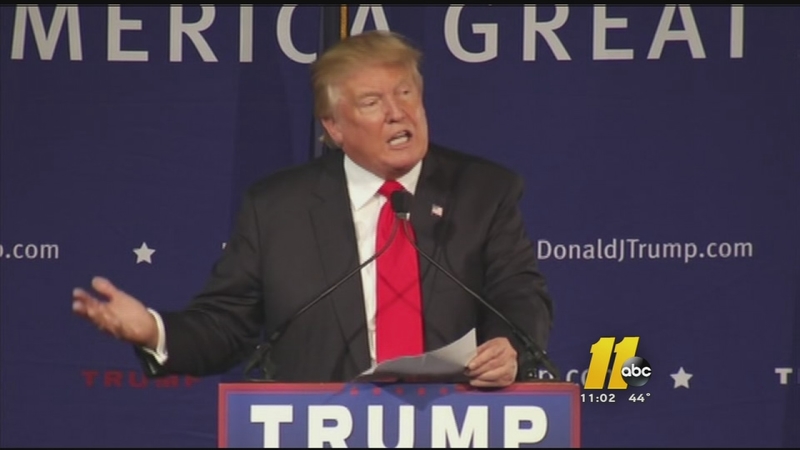 DURHAM, NC (WTVD) -- Republican presidential candidate Donald Trump called Monday for a "total and complete shutdown of Muslims entering the United States," an idea that prompted one of his rivals to call him "unhinged."

The proposed ban would apply to immigrants and visitors alike, a sweeping prohibition affecting all adherents of Islam who want to come to the U.S. The idea also raised immediate questions about whether it could pass muster under constitutional protections of the free exercise of religion.

From a rally in Charleston, South Carolina, Trump doubled down on the statement.

"They have no respect for human life," Trump said.

"Donald J. Trump is calling for a total and complete shutdown of Muslims entering the U.S. until our country's representatives figure out what the hell is going on!" he continued.

But while Trump got a warm reception at his rally, they weren't cheering his comments in Durham. At an interfaith service at St. Phillip's Episcopal Church, Christians, Jews, and Muslims gathered in a show of unity aimed at healing some the new divides since the controversy over Syrian refugees in the wake of the Paris attacks and concerns over radicalized Muslims following the terror in San Bernardino, California.

"I hear a lot of hateful rhetoric around immigrants and refugees," said Jennie Bell with the North Carolina Council of Churches. "I respond with 'We are called as people of faith to love our neighbors regardless of who those neighbors are.'"

At a potluck dinner afterwards, Murat and Nayma Kose told ABC11 they are Muslim immigrants who call their new country home and are offended by Trump's rhetoric.

"And for him to say that as a presidential candidate, that's just shameful. I'm like people would make fun of us, Americans, that we would be able to even say that," said Nayma.

"I am 100 percent sure Donald Trump is not gonna be elected. American people are very wise people," said Murat.

Trump's campaign has been marked by a pattern of inflammatory statements and he kicked off his campaign with a speech in which he said some Mexican immigrants are rapists and criminals. He recently drew criticism for retweeting an image of inaccurate statistics that vastly overrepresented the number of whites killed by blacks. But so far those and other errors of fact have not diminished his popularity among many Republican voters.

Since the Paris terrorist attacks, a number of Republican presidential contenders have proposed restrictions on Syrian refugees - with several suggesting preference for Christians seeking asylum - and tighter surveillance in the U.S.

But Trump's proposed ban goes much further than those ideas, and his Republican rivals were quick to reject the latest provocation from a candidate who has delivered no shortage of them.

John Kasich slammed Trump's "outrageous divisiveness," while a more measured Ted Cruz, who has always been cautious about upsetting Trump's supporters, said, "Well, that is not my policy."

He did not respond to questions about whether it would also include Muslims who are U.S. citizens and travel outside of the country, or how a determination of someone's religion might be made by customs and border officials.

There are, for example, more than 5,800 servicemen and women on active U.S. military duty and in the reserves who self-identify as Muslim and could be assigned to serve overseas.

Trump was also unclear on whether his ban would apply to Muslim allies in the fight against Islamic State militants.

Ari Fleischer, a former aide to Republican President George W. Bush, tweeted, "Under Trump, the King Abdullah of Jordan, who is fighting ISIS, won't be allowed in the US to talk about how to fight ISIS."

Trump has taken a particularly hard line against Muslims in the days since the Paris attacks, advocating enhanced surveillance of mosques due to fears over radicalization.

Trump's proposal comes a day after President Barack Obama spoke to the nation from the Oval Office about the shootings in San Bernardino, California, which Obama said was "an act of terrorism designed to kill innocent people."

The FBI said Monday the Muslim couple who carried out the massacre had been radicalized and had taken target practice at area gun ranges, in one case within days of the attack lasts week that killed 14 people.

White House spokesman Josh Earnest accused Trump of playing on people's fears and trying to tap into "a darker side, a darker element" of American society.

From the Democratic presidential campaign, Bernie Sanders said: "Trump and others want us to hate all Muslims. The United States is a great nation when we stand together. We are a weak nation when we allow racism and xenophobia to divide us."

But will it hurt his campaign? "I have no idea," McCain said. "I thought long ago that things he said would hurt his prospects, and he continues to go up."