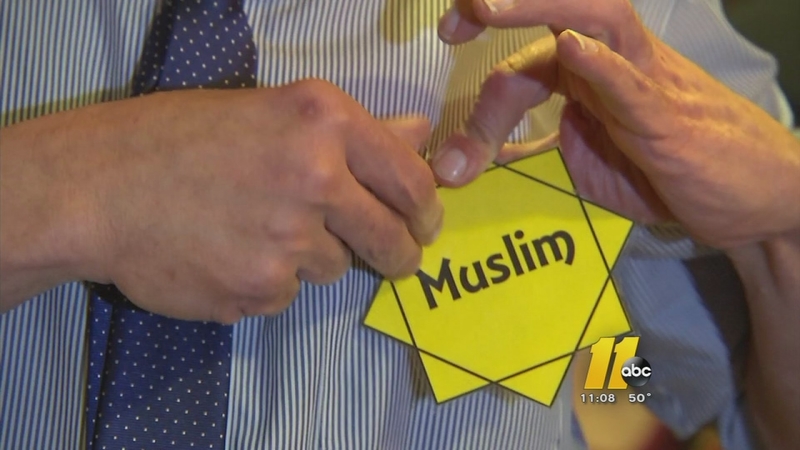 RALEIGH (WTVD) -- A Hillsborough immigration attorney kicked out of a Donald Trump rally in South Carolina last week says the Republican presidential candidate and frontrunner is stoking fear and hatred.

It's the second time Marty Rosenbluth has attended a Trump rally posing as a supporter.

Rosenbluth waited for Trump to reiterate his call for a ban on Muslims entering the U.S. Then, he and others took off their Trump campaign buttons and replaced them with yellow stars similar to the stars the Nazis made Jews wear during the Holocaust.

"It's very scary. I'm Jewish I lost a lot of family in the Holocaust," said Rosenbluth.

While Trump insists his proposed Muslim ban is fueled by national security concerns following San Bernardino and the Paris attacks, Rosenbluth said the proposal has echoes of Nazi Germany.

"We had it planned so that when Trump started to rant and rave against Islam and against refugees and immigrants we would take these Trump buttons off and put these on," Rosenbluth explained.

"And we just stood there silently. We weren't yelling, just standing there silently. And after about 4 or 5 minutes, the security folks told us we had to leave," he continued.

While Rosenbluth was ushered out and the rally continued, he says his concern is the lasting impact of the campaign.

"The type of rhetoric that they're using will live long after the primary," he said.

Despite protests from people like Rosenbluth and Trump's anti-Muslim proposal being widely attacked by other Republicans, his level in the polls has actually risen since he began making the controversial comments.

At a debate Tuesday in Las Vegas, Trump refused to back away from his proposal, saying the top priority has to be a cautionary U.S. government stance in order to protect the people.