President Trump rallies in Charlotte ahead of Super Tuesday

President Trump started speaking just after 7 p.m. He mentioned the stock market's record bounce-back Monday, while throwing sharp barbs at the thinning Democratic presidential field on the eve of Super Tuesday's big round of primaries.

Trump's spirits were high after the Dow Jones Industrial Average soared nearly 1,300 points, or 5 percent, clawing back from a seven-day rout in which it dropped more than 3,500 points. Stocks rose Monday on hopes that central banks will take action to shield the global economy from the effects of the coronavirus outbreak.

"Do you think our opponents were thrilled when they saw the stock market today?" asked Trump, who has seen a bull market throughout his three years in office.

The president threw some of his hardest punches at former Vice President Joe Biden, who is coming off a decisive win in Saturday's South Carolina primary. Trump picked at Biden's propensity for rhetorical stumbles on the stump, suggesting it was a sign of senility.

Trump allowed that Vermont Sen. Bernie Sanders, who won finished at or near the top in three of the first four nominating contests, "does have some enthusiasm, but much less than we have."

It's a crucial moment in the nomination battle: Biden is making the case that moderates need to consolidate behind him to stop Sanders, a Democratic socialist, and give Democrats a shot at beating Trump in November.

Trump speculated there may have been a "quid pro quo" for Buttigieg - the offer of a job in the next Democratic administration for dropping out and endorsing Biden.

"Impeach them. They should be impeached," Trump said.

Trump has offered daily commentary on the Democratic race, alternately boasting that no Democrat has a chance against him, ridiculing the top tier of candidates with derisive nicknames, and arguing that the party's establishment is trying to steal the nomination from Sanders.

Sanders shot back at Trump on CNN Monday night, saying: "President Trump, stay out of the Democratic primary. Why don't you do your job for a change as president?"

Everything you need to know for Super Tuesday

Earlier Monday, Trump said he had no qualms about attending a large stadium rally despite the coronavirus threat.

"I think it's very safe," Trump said of campaign rallies, and he noted that the Democratic candidates are having plenty of rallies themselves.

North Carolina, a perennial swing state, is among the 14 states, one territory and voters abroad that will cast their ballots Tuesday, races that represent about a third of all delegates.

Trump's rally in Charlotte follows his campaign's pattern of churning out robust counter-programming throughout the Democratic nominating process. In recent weeks, the president has held rallies in each of the four early voting states for the presidential nomination.

The president and the GOP are giving North Carolina, which has been decided by close margins over the last three presidential election cycles, plenty of attention.

"Ladies and gentlemen, you have got a stark choice and it starts tomorrow.," Tillis told the crowd. "We're both on the ballot. You need to vote for us so we can go back and do it again."

Trump's words offered a boost for Tillis, whose seat is a major target for Democrats.

"Thom has really been incredible. He's been working every day," Trump said. "And he really wants to fight the radical left and he does it. And he knows how to fight and take care of our amazing veterans and stop illegal immigration."

I asked @POTUS supporters what it means to have the President in North Carolina #abc11 #politics pic.twitter.com/6lm6IG4nG4

Republicans have picked Charlotte to host the Republican National Convention. Trump also visited Charlotte last month as part of a series of revitalization and "opportunity now" summits, programs he and administration officials have highlighted as he tries to chip away at the Democrats' electoral advantage in minority communities.

"North Carolinians have enjoyed a booming economy, fairer trade deals, and safer communities thanks to President Trump's 'Promises Made, Promises Kept' agenda," Trump Victory spokesperson Samantha Cotten said in a statement. "Come November, voters in the Tar Heel State will remember they are better off now than they were four years ago and vote to re-elect President Trump."

Preliminary figures from the State Board of Elections show more than 777,000 North Carolina residents cast ballots through early in-person voting that ended Saturday afternoon. About 686,000 voted through this method during the March 2016 primary, when there were 10 early-voting days. This year there were 17. Democrats voted a disproportionate portion of ballots compared to their percentage of registered voters.

We just caught up Dale and Jordan from #Boone and asked them a series of questions ahead of @POTUS rally tonight at @TheBOplex #abc11 #SuperTuesday #CharlotteNC pic.twitter.com/VQmoSV3L8V 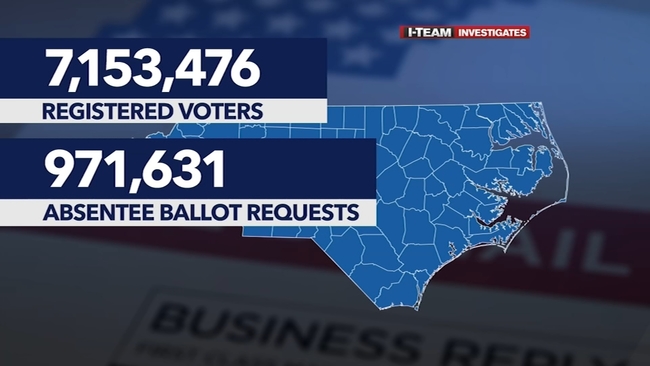 Make your vote count by avoiding these common mistakes