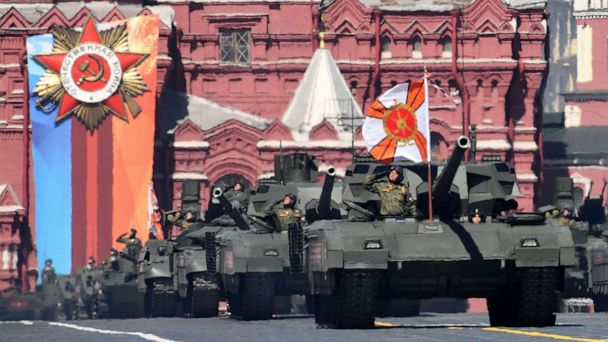 WASHINGTON -- President Donald Trump said Friday that he would "love to go" to a Russian military parade that Western officials have avoided in recent years over Russia's annexation of Crimea, after Russian President Vladimir Putin invited him earlier this year.

Trump confirmed Putin had invited him to Russia's annual Victory Day parade, which commemorates the end of World War II and is Russia's biggest national holiday. Western leaders have skipped the May 9 parade -- which features dozens of missiles and tanks rolling through Moscow's Red Square -- after Russia invaded Ukraine and annexed Crimea in 2014.

"I was invited, I am thinking about it," Trump told reporters at the White House on Friday, after a reporter from a Russian state news agency, TASS, asked him about it. "That's right in the middle of our campaign season, but I am thinking I would certainly think about it. President Putin invited me to the -- it's a very big deal, celebrating the end of the war, et cetera, et cetera. Very big deal."

The Kremlin said in June that Putin had extended an invitation to Trump when they met on the sidelines of the G-20 summit in Osaka, Japan, that month, according to TASS. At the time, Putin's spokesman Dmitry Peskov said Trump had responded positively; a White House official said then that Trump "believes it's important to commemorate the Allied troops who lost their lives in WWII" but that he had "not confirmed participation."

On Friday, Trump suggested the 2020 election might influence his attendance.

"I appreciate the invitation," Trump said. "It is right in the middle of political season, so I'll see if I can do it. But I would love to go if I could."

George W. Bush was the last U.S. president to attend the parade, in 2005, while President Bill Clinton attended 10 years before.

Trump has in the past expressed affection for displays of military might. He called a 2017 Bastille Day parade he attended in France "one of the greatest parades I've ever seen" and said it inspired him to hold his own militaristic celebration at the Lincoln Memorial for the Fourth of July this year.

As Trump contemplated going to a celebration of Russian military might, his top defense officials have for several years been warning of current threats and future challenges posed by Russia, among others.

"Russia's foreign policy demonstrates a blatant disregard for state sovereignty," Secretary of Defense Mark Esper said in Brussels last month. "In addition to their military incursions in Georgia and Ukraine, their use of cyber warfare and information operations continues to interfere with other states' domestic affairs. In the case of both China and Russia, their malign behavior, combined with aggressive military modernization programs, puts the international security environment on a trajectory that should concern all free nations."
Report a correction or typo
Related topics:
abc newsnational
Copyright © 2020 ABC News Internet Ventures.
More Videos
From CNN Newsource affiliates
TOP STORIES