Trump's convention sells optimism - based on grievance and fear: ANALYSIS 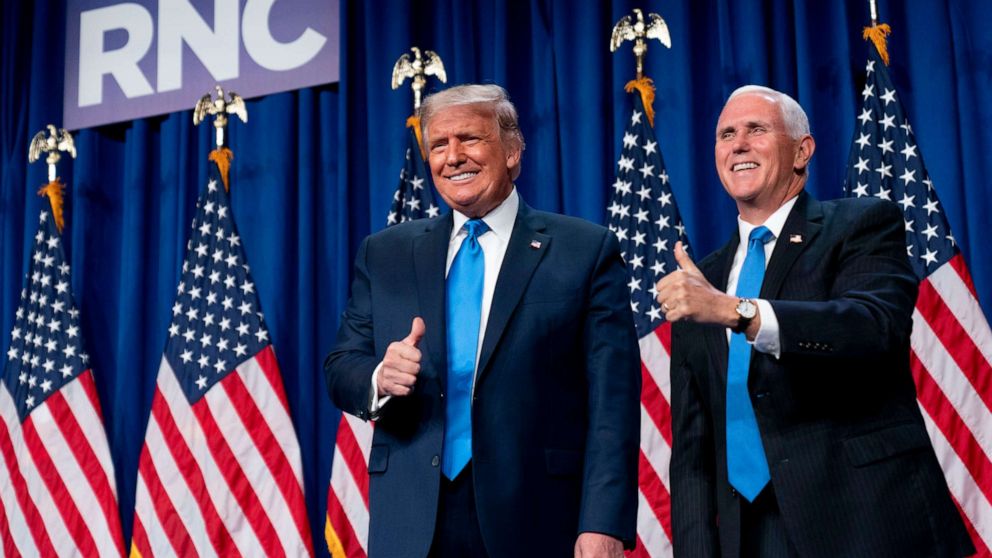 The hero of this story is President Donald Trump. The story only works if he could lose -- and that such a loss would be very, very bad.

The question looming over the Republican National Convention and beyond is whether the broader nation will listen to a rewritten tale with fear at its core -- or whether this week is mainly Trump supporters telling themselves what they want to hear.

As told through night one of the mainly pre-taped convention, Trump's leadership has already taken the nation through to the other side of the crisis caused by COVID-19 -- the "China virus," as it was repeatedly called Monday.

The country is back on the move -- yet that progress is threatened by former Vice President Joe Biden and the agenda he would empower. On that path, or so the story goes, are shutdowns, riots, crime, higher taxes, economic ruin and even an entirely different nation.

"Their vision for America is socialism. And we know that socialism has failed everywhere," said former United Nations Ambassador Nikki Haley.

"Your family will not be safe in the radical Democrats' America," Mark McCloskey, who appeared alongside his wife to talk about the viral moment where they brandished guns to warn protesters away from their house in St. Louis.

"Crime, violence and mob rule," said Rep. Jim Jordan, R-Ohio, describing what he said was already going on in cities run by Democrats.

"Joe Biden's radical Democrats are trying to permanently transform what it means to be an American," said Sen. Tim Scott, R-S.C., in closing out the night. "They will turn our country into a socialist utopia."

Republicans found broad unity in prosecuting a case against Biden, almost treating him as if he was the incumbent instead of a former vice president who has been out of office for four years. There's a concerted effort to focus on the economy -- one of the few issue areas where Trump is perceived to have a natural advantage, according to polling.

But distortions of what Biden and his running mate want are tougher to sell when the realities of Trump's America are this stark. This summer of illness, disruptions, racial tensions and economic strife serve as the counterweight -- and they don't need week-long conventions to be felt in people's lives.

Then there's Trump himself. The president popped up a few times at night one of his convention, in conversations with people who credit him with keeping them and their families safe.

But the president earlier in the day delivered a rambling speech to delegates in Charlotte that trafficked in conspiracy theories -- including an allegation that Democrats are "using COVID to steal an election."

Of course, Trump was speaking to party leaders who are all-in on Trump. In one small but telling example, the Republican Party voted formally Monday to not even adopt a new party platform. Instead, delegates approved a resolution stating, in part, "That the Republican Party has and will continue to enthusiastically support the President's America-first agenda."

As for that agenda, Trump is continuing to more effectively define what he is against than what he is for. His grievance-based brand of politics needs enemies -- and he finds them everywhere, at least in a setting where Trump's party controls the speaking slate.

"It's almost like this election is shaping up to be church, work and school versus rioting, looting and vandalism," the president's eldest son, Donald Trump Jr., said Monday night.

That's not necessarily how the election will be framed, of course. The president has his work cut out for him as he seeks to turn around the mood of an exhausted and scared nation, and frame the election as a choice rather than a referendum.

But Trump's calculations about what animates the country worked once before. He has proven that he knows how to sell a story.
Report a correction or typo
Related topics:
abc newsnational
Copyright © 2021 ABC News Internet Ventures.
More Videos
From CNN Newsource affiliates
TOP STORIES