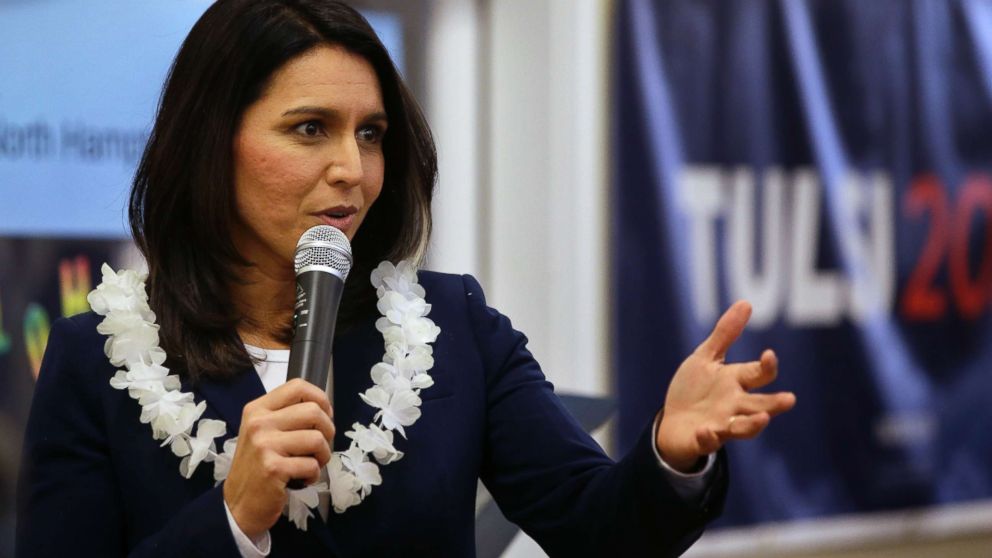 Democratic presidential candidate Tulsi Gabbard defended her non-interventionist foreign policy stance in an interview on ABC's "The View" Wednesday, deflecting criticism painting her as an apologist of Syrian President Bashar al-Assad by citing her own military service and the outcomes of those living in affected countries.

Gabbard, D-Hawaii, an Iraq War veteran who holds the rank of major in Hawaii's National Guard and is currently in her fourth term in the House of Representatives, argued further that the money spent on such conflicts could be better channeled towards domestic goals.

"It is those experiences of understanding and knowing first-hand the cost of war, both on our service members, on our veterans, as well as the cost on the people in the countries where we intervene, as well as the trillions of dollars, our taxpayer dollars, that are spent on waging these wars, dollars that are sorely needed to address the very real urgent needs of our families, our communities, our neighbors right here at home," she said.

Prior to her presidential campaign, the congresswoman was perhaps best known for a controversial 2017 trip to Syria to meet with Assad. She has since declined to label the leader an "enemy of the United States."

"My point is that the reality we are facing here is that, since the United States started waging a covert regime change war in Syria starting in 2011, the lives of the Syrian people have not been improved," she added, referencing U.S. funding of rebel groups to overthrow Assad under the Obama administration.

Long-rumored to be interested in a presidential run, Gabbard, who was one of the few Democratic members of Congress to endorse Sen. Bernie Sanders, I-Vt., in 2016, surprised observers with a seemingly spur-of-the-moment campaign declaration during a CNN interview in January. She eventually followed that announcement with a formal launch event in Honolulu earlier this month, but her candidacy has already found itself embroiled in a number of controversies.

In addition to the continued questions about Syria, a January CNN report uncovered the congresswoman's past work for an organization run by her father that worked to pass a state constitutional amendment to ban same-sex marriage.

"Working with my father, Mike Gabbard, and others to pass a constitutional amendment to protect traditional marriage, I learned that real leaders are willing to make personal sacrifices for the common good. I will bring that attitude of public service to the legislature," she told the Honolulu Star-Bulletin as a 21-year-old state legislature candidate in 2002.

Gabbard apologized in the wake of the story, explaining that her views have since evolved and that she "regret[s] the positions [she] took in the past."

The congresswoman has additionally had to distance herself from former Ku Klux Klan leader David Duke, who has long praised Gabbard, ranging back to the early days of the Trump administration, during which her non-interventionist views earned her consideration for the roles of secretary of state, secretary of defense and ambassador to the United Nations.

Expanding on her foreign policy approach on "The View" Wednesday, Gabbard was critical of U.S. involvement in the ongoing political unrest in Venezuela, where opposition leadership headed by Juan Guaidó -- and supported by the Trump administration -- is attempting to unseat President Nicolás Maduro.

"Every time the United States, and particularly in Latin America, has gotten involved in regime change, using different tools to enact that regime change, there have been both short and long-term devastating impacts," Gabbard said. "If there are ways that we can work with surrounding countries to try to get humanitarian aid in to people there, then we should be doing that."

"But for the United States to go in and choose who should be the leader of Venezuela, that is not something that serves the interests of the Venezuelan people," she continued. "That's something that they need to determine themselves."

On domestic policy, where the crowded Democratic field has begun to fracture in recent weeks, Gabbard expressed strong support for environmental aims, but said she does not endorse the proposed "Green New Deal," explaining that she believed the legislation was too vague.

On free college tuition and universal health care, however, two tentpoles of Sanders' insurgent 2016 campaign, Gabbard said that both were achievable and downplayed concerns about the costs of the latter, saying that expenses would be lower for those in the system and that it could be achieved alongside private insurance.

"Making sure that we have this basic quality level of care for every American is what Medicare for all would do and that's what I support," she said.
Report a correction or typo
Related topics:
abc newsnational
Copyright © 2021 ABC News Internet Ventures.
TOP STORIES
Raleigh names Patterson as new police chief
NCBOE approves documents for controversial social studies standards
Restaurants begin dishing out 20 percent Living Wage Fee to customers
DOD issues rule on Stayskal Act, will pay claims of medical malpractice
Fort Bragg soldier killed, 2 others injured in traffic accident
Man duped into buying Jeep that had 100k more miles than advertised
Unruly passenger escorted off NC plane for refusing to wear mask
Show More
Biden signs bill to make Juneteenth a federal holiday
'Armed and dangerous' carjacking suspect on the loose
1 dead in crash that shut down I-440 eastbound in Raleigh
Potential Tropical Cyclone 3 forms in the Gulf of Mexico
Wake County 'boot camp' teaches how handle vaccine reluctance
More TOP STORIES News