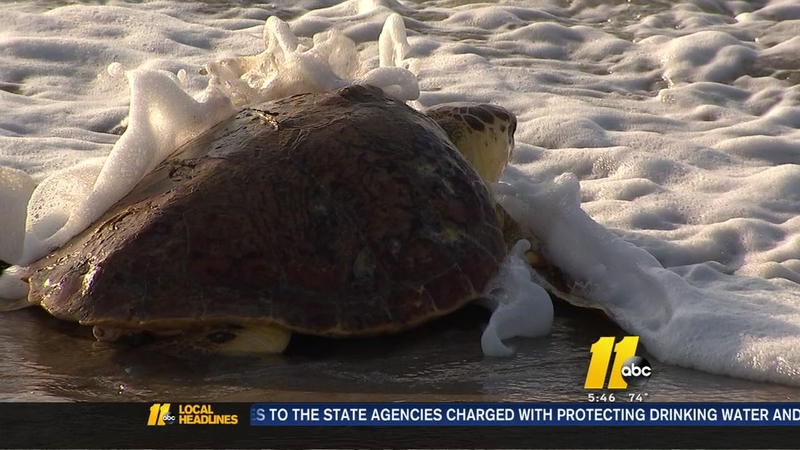 SURF CITY, North Carolina (WTVD) -- Since the mid-90s, the Karen Beasley Sea Turtle Rescue and Rehabilitation Center in Surf City has released more than one thousand rehabilitated sea turtles back into the Atlantic.

On the day we met with Jean Beasley, the hospital director and founder was in Topsail Beach with volunteers, fourth-year vet students from NC State, and a few onlookers to release Sailor and Duncan, two of the turtles the hospital has spent the summer caring for.

Sailor was injured by a boat, her injuries apparent on her shell. The older loggerhead turtle moves a little slower than her release mate Duncan.

Sailor was gently lifted from a large blue bucket-like container and placed on the wet sand. With nothing but the waters ahead of her, she slowly crawled towards home. The small crowd cleared the way. Soon, the cheers of her helpers faded to the sound of waves that crash around her.

Duncan eagerly awaits his return to the sea pic.twitter.com/jN5hWFLoIX

Duncan showed eagerness to follow, with arms flapping in glee. NC State student Jamie Gurlach held the turtle who was caught by a fisherman.

She, along with another student, waded into the ocean with Duncan who disappeared as quickly as the water touched the bottom of his shell.

It was a bittersweet moment for the group watching from shore.

"It's kind of like sending your kids off to college. You know that there are a lot of dangers out there, and they aren't even going to call home to get money, so we may never hear from them again, and that's a good thing," Beasley said.

Over the coming days and weeks, volunteers will walk the shoreline to ensure that Duncan and Sailor don't return.

Back at the hospital, Beasley told us that there has been a decrease in turtle nests this year along the shores of Topsail. She explained that it could be because of storm surge, or simply that it wasn't their turtle's year to lay.

Overall, the North Carolina Sea Turtle Project shows an increase in Loggerhead nests along the Carolina coast. But, Beasley says the species population is still nothing compared to that of fifty or sixty years ago.

"The message that the sea turtles bring us is that the ocean is unsafe. We have let our liter fill the oceans, liter of all kinds: toxic chemicals, discarded nets, plastics all over the place," Beasley said.

There are seven species of turtles that swim the seven seas, most of which are endangered. According to the World Wildlife Fund, the classification looks something like this:

At Beasley's hospital, you'll find all sorts of turtles. Some were stranded on shore, some victims of boats, others of cold stun. The hospital takes turtles from all over and for every reason.

"They may be dying when they come in, but if we can make them more comfortable that's part of our mission too," Beasley explained.