'It truly is surreal': Triangle Ukrainians hope and pray Putin backs down as crisis grows hotter 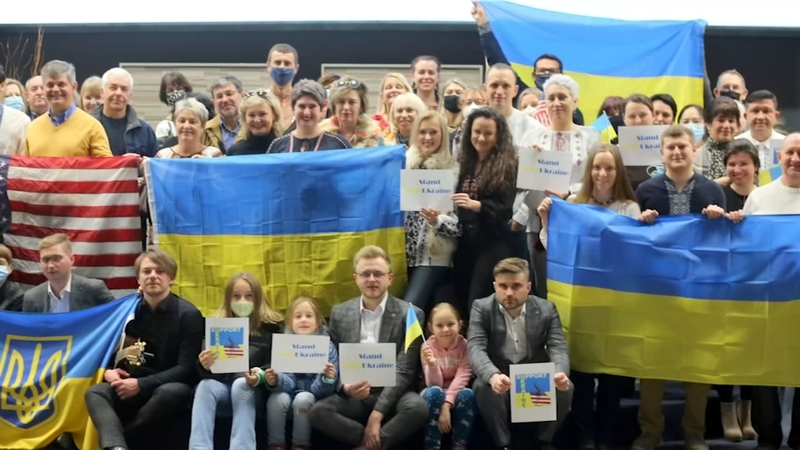 WAKE FOREST, N.C. (WTVD) -- As President Joe Biden walked to the White House lectern with a sobering update about Ukraine, Olena Koslova-Pates was back home in Wake Forest glued to the television.

"It truly is surreal to be speaking about this," Pates told ABC11 on Friday night.

It's been three weeks since we last spoke to Pates on the porch of her home where she proudly flies the Ukrainian flag of her homeland. Her thoughts Friday night, with her mother, father, and so many family members and friends back in Ukraine -- who three weeks ago were surprisingly not as concerned about a Russian invasion.

"I think they are more concerned now," Pates said. "I think they see some of these signs that we have been seeing here."

Ukrainians in the Triangle hoping and praying Putin backs down from a potential Ukraine invasion. Some urging family back home to get out of harm’s way.

“It truly is surreal to be speaking about this.” #abc11 pic.twitter.com/B6ajP2ShQN

At the White House, Biden was asked whether he had any indication of whether Russian President Vladimir Putin has made a decision on whether to invade

"As of this moment, I'm convinced he's made the decision," Biden said.

Pates hopes that isn't the case.

"I hope he doesn't. I pray he doesn't," Pates said. "Today, I was talking to a friend who said, 'Yeah, we know exactly where the bomb shelter is. If need be, we go there.'"

Pates is not just hoping and praying. She's also taking action. She and her group of Ukrainians in the Carolinas have been constantly raising money to send relief supplies back to Ukraine. And rallying in downtown Raleigh to raise awareness about why Ukraine should matter to Americans.

It's about liberty, they said -- likening Ukraine's struggle to keep its democracy to the American war for independence.

Back in Wake Forest, Pates, who is a stay-at-home mom and a daughter of Ukraine, wishes she could do even more.

"As far as my family, I have urged them to come out of Ukraine. At this point, they're choosing to stay," she said. "My father has said several times, I have my hunting rifle if need to go and fight."
Report a correction or typo
Related topics:
societywake forestwake countyrussiaukrainefamilyjoe biden
Copyright © 2022 WTVD-TV. All Rights Reserved.
TOP STORIES
Strong storms push into central NC bringing heavy rain, flooding
Homeless veterans get an assist from Durham's Rotary Club
Truck slams into NC woman's new home
SCOTUS makes it tougher for prisoners to argue counsel was ineffective
Shelf cloud seen in Raleigh ahead of line of storms
New NC flood monitoring system ready for next big storm
Father puts 1,000 miles on his car to find specialty formula
Show More
Student says he was told not to mention 'Don't Say Gay' law in speech
Clayton police arrest man in shooting that injured 1
More than 75,000 pounds of baby formula lands in US amid shortage
Report: Top Southern Baptists stonewalled sex abuse victims
Arby's is selling a fast-food staple it's never offered before
More TOP STORIES News