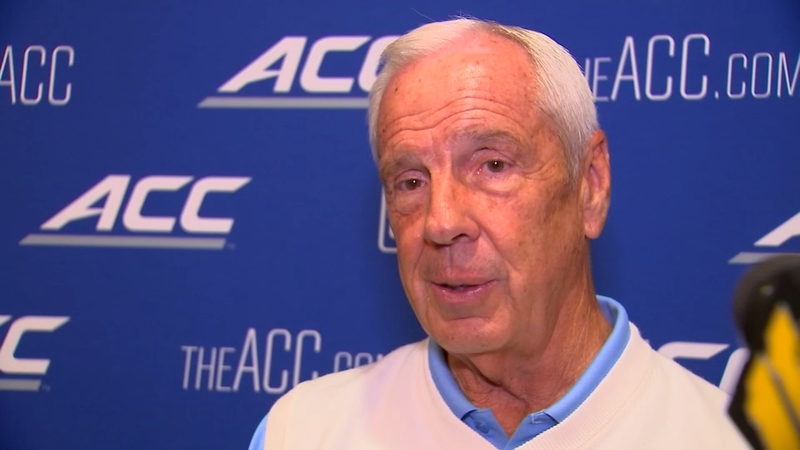 UNC's Roy Williams on loss of his big three

The Tar Heels have to replace production from the departed Cameron Johnson and Luke Maye and are battling injuries to players on the current roster.

Three players will be missing when the season starts -- freshmen guards Anthony Harris and Jeremiah Francis and junior forward Sterling Manley, all of whom are battling knee injuries.

Coach Roy Williams put no timetable on their returns. But he did admit the Heels might struggle in point production, particularly from beyond the arc.

"The biggest thing is we're going to struggle scoring," Williams said Tuesday at ACC Basketball Media Day in Charlotte. "Like I said, Cam and Luke and Kenny (Williams) aren't there so we'd better be a little bit better in every other area, run it a little bit better, get more action around the rim because we don't have the 3-point shooting."

Still, North Carolina has one of the top recruits in the country in freshman point guard Cole Anthony, but injuries have left the Tar Heels thin at the guard position.

Along with Harris and Francis being out, Leaky Black and Andrew Platek have also been battling through minor injuries forcing Williams to bring up a player from the JV team for practice.

Williams joked "the day before practice started I didn't even know the guy's name."

Garrison Brooks is one of the veteran leaders who will be expected to help the Tar Heels overcome those challenges.

"I think defense is one of the biggest things that will really set us over the top and get us to Atlanta (site of the 2020 NCAA Final Four)."

The road to Atlanta begins with the November 1 season opener against Winston-Salem State. But then the Tar Heels are expected to face a considerably stiffer challenge with an early conference game against Notre Dame on November 6.

UNC will be counting on transfer guards Justin Pierce and Christian Keeling to blend in and quickly contribute.

"Both those guys, they're going to be able to handle things more easily than freshman," Williams said. "We take two grad transfers, they have the experience. They'll handle the adversity better and be able to do some things for us that the typical freshman wouldn't be able.

UNC's Brandon Robinson talks about the challenge of starting ACC games earlier in the season.

Williams, like all the other ACC coaches, was asked Tuesday about the controversial California law that goes into effect in 2023 allowing athletes at universities in that state to make money from their images, names or likenesses. The law also bans schools from kicking athletes off the team if they get paid.

"We are all talking about something that we don't know what the crap it is," Williams said. "I mean it's like putting me in charge of nuclear weapons."

Williams may not know the answers, but he does feel something needs to change.

"There's a lot of money being made," Williams said. "When Peyton Manning was at Tennessee they sold 50,000 of his jerseys for something like $70 a pop and he didn't get one nickel. And that's not right. I don't care what way you look at it, that's not right."

UNC's Roy Williams pulls no punches on politicians and sports.