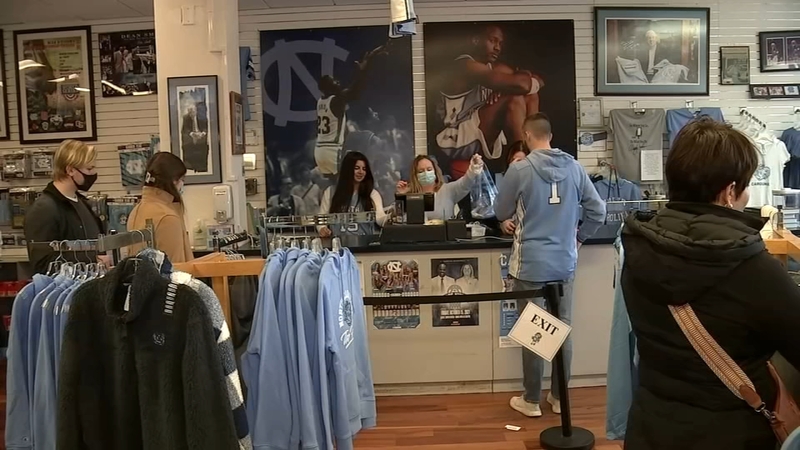 CHAPEL HILL, N.C. (WTVD) -- During a nearly two-year stretch that has felt anything but normal, that's the word students and business owners used often Saturday when describing big crowds in downtown Chapel Hill for the Duke-UNC game.

"We've had a lot of Saturday basketball games, and that's certainly helped business too. I think people, they do want to get back to normal, and they do want to shop and support their team, and go to the games," said Holly Dedmond, manager of Chapel Hill Sportswear.

No Saturday game bigger than this one, with Dedmond noting the rivalry game is their biggest basketball sales day of the year, and one of the busiest behind football gamedays.

"Since we opened this morning at 10, we have been busy. We've had a line all day long. People buying lots of jerseys, t-shirts, hats. All the normal stuff you want to take and wear to the game," Dedmond said.

Down the street, fans, mostly students, began lining up in the morning to secure a seat at Sup Dogs, a local restaurant.

"After everything last year, it feels like everything's lively, and it's back to some sort of normal again. So, we're looking forward to it. It's why we've been out here for so long," said junior Yash Shah.

Shah was part of a large group near the front of the line, with some saying they arrived as early as 9 AM. For younger students unable to fully take part in the Duke-UNC atmosphere last year, this year's first game provided a fresh opportunity.

"It feels great, I never got to experience that. I'm a sophomore, freshman year was a little different," said sophomore Namrta Gandhi.

"We haven't gotten tickets yet, so feel this is the best environment, everyone's together, we all chant," added fellow sophomore Shreena Patel.

The enthusiasm and packed tables were a welcome site for Sup Dogs owner Bret Oliverio.

"Chapel Hill's a small town so when there's no events and no crazy days like this, it can be tough. So, we're counting on as a business, these amazing days, we're slammed from 11 AM to 3 AM," said Oliverio.

The downtown buzz was palpable, with a sea of Tar Heel blue found for blocks along Franklin Street.