UNC football player goes public about his battle with depression 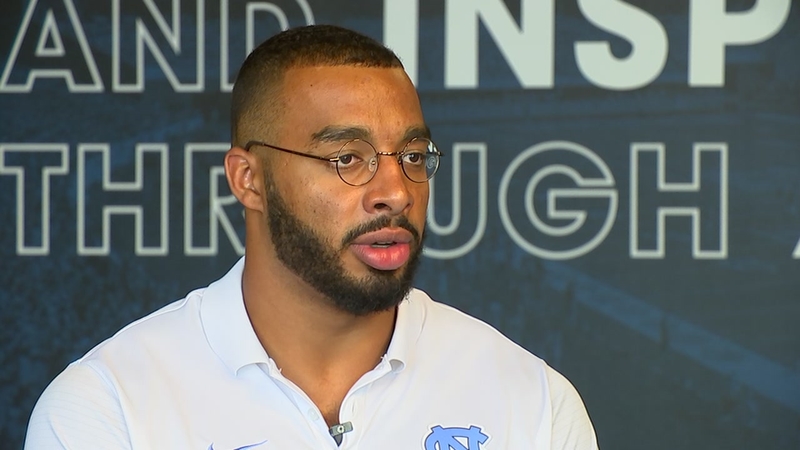 UNC player opens up about battle with depression

CHAPEL HILL, N.C. (WTVD) -- June 7 is a day UNC defensive end Jake Lawler likely won't ever forget. It's the day he went public with his years-long battle with depression, posting a deeply personal essay about his struggles since middle school.

By letting the world know of his hurt, he's hoping to help others walking the same tightrope.

"I wrote it for people like me," he said. "I wanted to reach out to them and let them know that everyone struggles."

You'd never suspect it when you meet Lawler, a talented D1 football player and aspiring media mogul. So often though, that's the case. Depression isn't a sign you wear.

"We don't understand the extent of it because it's invisible," Lawler said.

Great meeting with @Jakelawler42 today at UNC. He went public a short time ago about his ongoing battle with depression and now wants to help others who may be in the same situation. The story at 6:25. pic.twitter.com/l5sanlZEo8

For upward of eight years now, Jake has lived with mental illness. It began in middle school with teasing about his appearance and metastasized as he struggled to find an identity and acceptance as a mixed-race child.

"It's one thing to feel hopeless. It's another thing entirely to feel alone," he said. "If you truly feel like you don't fit in anywhere, in the black community, in the athletic community, the populace, it's truly heartbreaking."

His periods of despair ultimately led Lawler to nearly committing suicide as a high school sophomore. Knowing the devastation his family would feel stopped him that day, but he still couldn't bring himself to tell them about his pain.

"It's like an echo chamber of self-hatred. It drowns out every kind of ounce and iota of happiness," Lawler said.

Maintaining the outward facade of normalcy was exhausting in its own right.

"When I was thrust in the spotlight because of high school football, I realized that I had to put a mask on," he said. "Constructing that mask and wearing it for so long had been completely detrimental."

A high school star in Charlotte, Lawler chose to play ball in-state at UNC. When his depression came flooding back at the tail end of his freshman year, he poured himself into writing. It worked, but only for a while. After the euphoria of completing a long writing project in January of this year, his darkness returned.

"The most terrifying thing about my depression is that I don't know when it's going to happen," Lawler said. "It's happened at lunch, at dinner, working out and it just comes in waves and there's no rhyme or reason for why it comes."

Once again, Lawler contemplated suicide, this time from the top floor of a campus parking deck.

Once again - thankfully - he stopped short. Now, with help from UNC staffers such as Athletic Director for Student-Athlete Wellness Dwight Hollier, his mission is to help others.

Lawler said North Carolina has an extensive support system in place for people just like him. It's getting to the point of asking for help that remains the biggest barrier.

"Athletes in general have this aura that they are tough and strong and macho and therefore don't get hurt," Hollier said. "For an athlete to share the struggle and pain they're having shows that they're just like everyone else. They too hurt. It gives the permission to other student-athletes to say 'yeah, I'm struggling or I've felt that way too.'"

"We're all really proud of Jake. He's gone through some tough times and to find the strength and courage to share his story is impressive.

We've talked to our team about looking out for each other, trying to take care of each other, but sometimes you just don't know someone is hurting. What Jake is doing is trying to show others in the same situation that there are people to talk to and people that will support you.

By sharing his story, he's not only helping himself come to terms with what he's dealing with, but he may help someone else, which is what he's hoping to do by going public with this.

I want to commend Jake for taking these steps and we'll continue to provide him all the resources we can to help him with his battle against depression."

Lawler said he's received an outpouring of support from coaches and teammates. He expected that. What has surprised him is the outpouring from people who are struggling.

One parent sent him the eulogy they delivered at their teenage son's funeral after he had committed suicide. Lawler has also heard from veterans reaching out about PTSD and all manner of other people struggling themselves. It is proof positive that his message is having the impact he'd hoped.

"It's unbelievably powerful to share your story," Lawler said. "For anyone that is watching, I'm asking you to open up, to share to someone. You don't have to do what I did, but if you at least tell your family, tell someone close to you, that's the step. That's the first step to the healing process."
Report a correction or typo
Related topics:
sportschapel hilldepressionmental healthunc tar heels
Copyright © 2022 WTVD-TV. All Rights Reserved.
TOP STORIES
Court papers show how investigators linked suspect in Hedgepeth murder
COVID-19 vaccines do not affect fertility, study finds
James Webb telescope now in orbit around the Sun
Omicron-specific COVID-19 vaccine starts clinical trials
LATEST: New locations give out N95 masks
8,500 troops placed on heightened alert for European deployment
As last-ditch effort, Cary tapas bar launches fundraiser to stay open
Show More
Supreme Court to hear challenge to race in college admissions
George Floyd's family reacts as civil rights trial begins
Eateries hope for community support during Triangle Restaurant Week
No charges for Johnston County deputy who shot drug suspect in wrist
Mental health providers of color see influx of patients
More TOP STORIES News