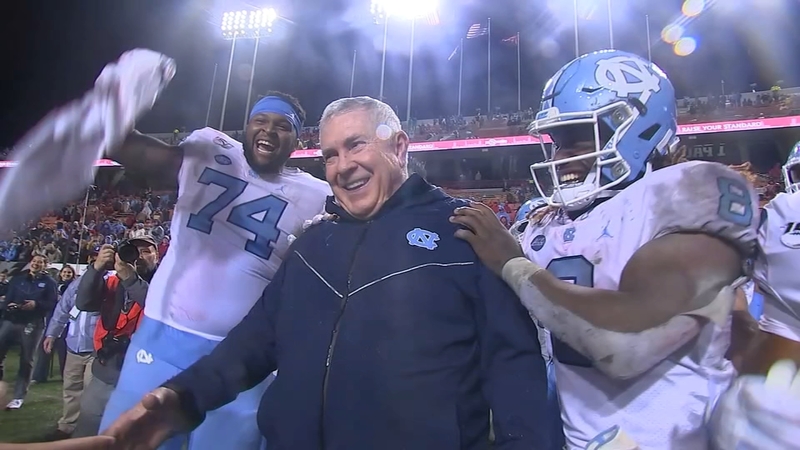 Back in 2008, redshirt freshman Russell Wilson rolled into Kenan Stadium and dismantled the Tar Heels to the tune of 41-10.

Wilson threw for a career-best 279 yards and 2 TDs, further gutting the Carolina defense with 50 yards on the ground.

He had UNC on a string. It was the culminating performance of a season where Wilson wound up winning ACC Rookie of the Year and being named to the ACC First Team. It was clear he was a star in the making.

Freshman Russell Wilson went to Chapel Hill and whipped UNC 41-10. Freshman Sam Howell is about to go up 41-10 in Raleigh.

The similarities between that game and what we witnessed Saturday at Carter-Finley can't be ignored.

All told, Howell slung 35 TDs this year. He's the most prolific true freshman QB in power conference history, a lock to win ACC Freshman of the Year, and although he won't beat out Trevor Lawrence for first-team honors, it's clear that barring injury, he figures to be the dominant QB force in the ACC for the next two years.

It's Howell's brilliance and the youth of the other weapons on Carolina's offense that gives the Heels the greatest reason for optimism going forward.

As Mack said after the game - he and the UNC coaches only had hope to sell on the recruiting trail and to his team back in the spring. Now they've got some concrete momentum. 6-6 is hardly world beating, but just getting back to a bowl game is certainly a step in the right direction.

What Mack and Howell brought back to the UNC program this year was a sense of optimism and dynamism. They were in virtually every game, for better or worse. Mack clearly has captured the belief of his players. Things could've gone sideways with a blowout loss to Clemson in Week 5, instead UNC battled to the brink of an incredible upset.

There's undeniable steam on the recruiting path too for Carolina. Mack ran the state in that regard in his first tenure and the evidence suggests he might pick up where he left off sooner than later.

At State meanwhile, the good vibes of back to back 9 win seasons went out the window this year.

The Pack's season peaked with their season-opening demolition of ECU. From there, even the wins were largely excruciating.

The lack of a functional quarterback among three different options and crippling injuries doomed any hopes NCSU had of a successful season, but there needs to be some coaching accountability as well.

It's one thing to lose, quite another to be non-competitive. That falls on Dave Doeren and his staff. The Georgia Tech loss, while their closest, was terrible by any measure. Getting drilled by multiple touchdowns by everyone else is unacceptable.

Part of the problem with the Pack's success of the past few seasons was having their assistant coaches pried away for other opportunities. Eli Drinkwitz and Dwayne Ledford being most prominent. Continuity is important on a staff, but the people charged with keeping things moving this year just didn't get it done.

The guess here is that there will be, at the very least, some staff shuffling, if not outright dismissals. Doeren seemed to be building the pre-eminent program in the Triangle. He was pumping players to the NFL and drawing a good chunk of the best talent in the state to continue that progress. This year was a gut punch.

Adding to the pain of this season is the uncertainty of next year. Absent an effective quarterback, winning games is tough sledding at this level. Devin Leary was supposed to be the next star, but that looks to be a tenuous hope at best based on what we've seen of him so far. It's hard to imagine someone on the current roster supplanting him next year, so maybe Doeren will be combing the transfer market again.