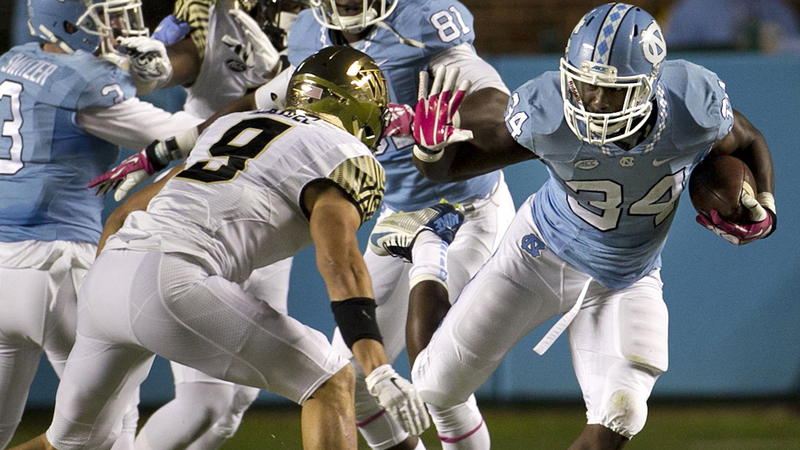 CHAPEL HILL, N.C. -- North Carolina didn't exactly carry over the momentum from its dramatic victory at Georgia Tech earlier this month but after a sluggish start the Tar Heels created more than enough momentum of their own on Saturday during an 50-14 victory against Wake Forest at Kenan Stadium.

The Demon Deacons led 7-0 at the end of the first quarter but that was short-lived. Marquise Williams, the Tar Heels' fifth-year senior quarterback, threw a 57-yard touchdown pass to Mack Hollins - one of his three touchdown receptions - on the first play of the second quarter.

After gaining 60 yards during the first quarter UNC nearly surpassed that total on its first play of the second quarter when Williams threw that 57-yard touchdown pass to Hollins. That play was the start of several quick-strike drives that firmly put the game in UNC's control.

By the end of the quarter, UNC had scored 29 points on four touchdown drives. They all lasted less than two minutes and none of them spanned more than five plays.

Marquise Williams: UNC's fifth-year senior quarterback shook off a poor start - though the two interceptions weren't necessarily his fault - to throw for 282 yards and three touchdowns. He also ran for 59 yards and another touchdown.

Elijah Hood: Sixty-five of Hood's 101 rushing yards came on a two-play scoring drive that ended with his 36-yard touchdown run with about 11 minutes to play in the second quarter. He averaged 12.6 yards per carry.

Mack Hollins: The Tar Heels' junior receiver caught three passes, all of them touchdowns, for 103 yards.

4 - Tar Heels' touchdown drives that lasted less than one minute.

10.6 - Yards per play UNC was averaging after Williams' 42-yard touchdown pass to Mack Hollins with 12 minutes to play in the fourth quarter. After that the Tar Heels began to play their reserves.

17 - number of plays UNC ran that generated at least 10 yards through its first drive of the fourth quarter, after which backup quarterback Mitch Trubisky entered the game amid a 43-14 lead.