Gov. McCrory not holding back when asked about HB2 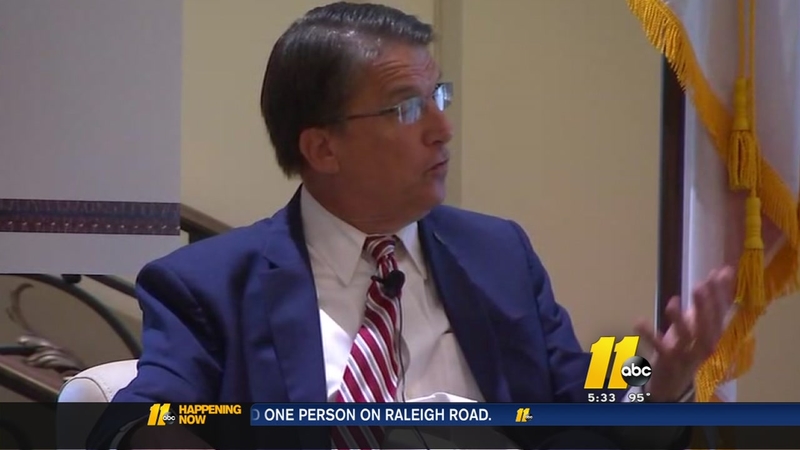 WAKE COUNTY (WTVD) -- During a town hall at Prestonwood Country Club on Friday, Gov. Pat McCrory told the audience the backlash over House Bill 2 is a matter of political correctness and pressure.

It's an issue McCrory is not backing down from -- even in the midst of more fallout from HB2. Thursday, the University of Vermont women's basketball team announced it will not play at UNC-Chapel Hill this winter because of the controversial law, which requires transgender people to use the bathroom that aligns with their biological sex in government buildings, schools and universities.

"I don't think our principals and superintendent should be subjected to allowing a boy, who thinks he is a girl, but is still a boy to be able to enter a bathroom, locker room and shower facility," McCrory stated. "It's a respectful disagreement but it's not a disagreement I should be disrespected for having."

McCrory reminded the crowd that he altered a part of HB2 to allow LGBT people to file discrimination claims, but still stands by the other parts of the bill.

Recently, the NBA All-Star game moved out of Charlotte, costing the state millions of dollars. McCrory says some businesses are telling him privately they feel the pressure to be politically correct and reject HB2. But opponents such as Christopher Brook, legal director for the ACLU, doesn't buy it.

"The positions that people take in public generally reflect how they feel about issues," Brook said. "I don't know who Gov. McCrory is talking to on a Friday evening but I do know that Wells Fargo, American Airlines and NASCAR and the NBA and artists who visit North Carolina say it makes it harder to do business."

Brook says the ACLU is suing the state over the bill. Friday, a judge granted an injunction that forces UNC to accommodate two transgender students and an employee before the case heads to trial in November.

"It's not political correctness to believe the LGBT youth and students shouldn't be bullied at school and that we should offer them protections that we would expect all kids have," Brook stated.

"The fact is that Governor McCrory's partisan social agenda has cost North Carolina thousands of jobs and hundreds of millions of dollars."

McCrory also spoke about the economy and teacher pay in North Carolina during Friday's town hall.

On teacher pay-Gov. @PatMcCroryNC says we're "thinking like the 21st century," believes we should pay for performance. #ABC11 #TriBizPower