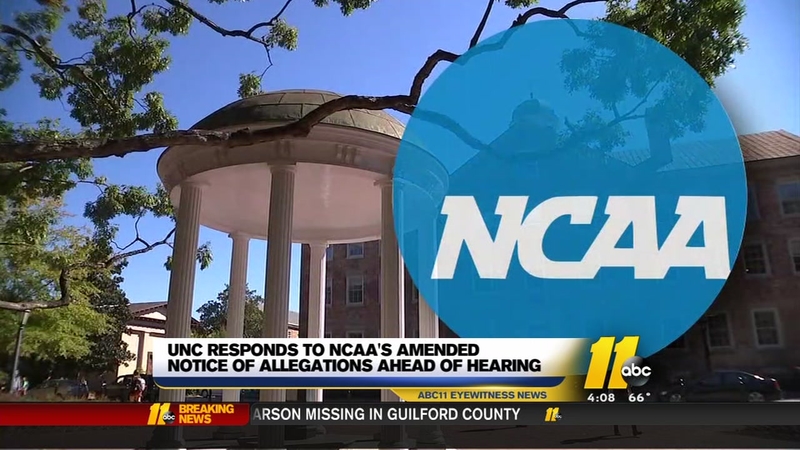 CHAPEL HILL, NC (WTVD) -- New documents made public Tuesday by UNC Chapel Hill show that the NCAA has looked at the various arguments the university is using to defend itself in an academic scandal and found "each without merit."

The release comes just days before UNC officials head to a preliminary hearing in front of the NCAA's Committee on Infractions Friday in Indianapolis.

The NCAA charged North Carolina with five violations, including a lack of institutional control and failing to sufficiently monitor its academic support program for athletes, in its long-running fraud scandal centered around independent study-style courses in the African and Afro-American Studies (AFAM) department that were misidentified as lecture courses that required no class time and one or two research papers. Run largely by an office administrator - not a faculty member - the courses featured GPA-boosting grades and significant athlete enrollments across numerous sports, while poor oversight throughout the university allowed them to run unchecked for years.

UNC has responded that the NCAA does not govern academic issues. But in the documents released Tuesday, the NCAA responds that it does have jurisdiction because the allegations are "tethered directly to athletes and how the unmonitored athletics department uses anomalous courses in a manner different from the student body in violation of NCAA rules."

The school also disputes a claim that it lacks institutional control - which is considered the highest violation. It also says the allegation that it "failed to monitor" the AFAM department and the academic support organization for student athletes should be thrown out on procedural grounds because it is beyond the statute of limitations.

In its response, the NCAA charges that the "willful violations" create an exception to the normal statute of limitations.

In addition to a lack of institutional control and failure to monitor the academic support program for student-athletes, Jan Boxill, who was a former faculty chair, a senior lecturer in ethics, and an academic counselor for athletes, is charged with knowingly providing extra benefits in the form of impermissible academic assistance to women's basketball players.

In its response, UNC said "Boxill did not engage in "willful"" violations. The term "willful" requires a deliberate or intentional act knowing that it is wrong."

Former AFAM department chairman Julius Nyang'oro and former office administrator Deborah Crowder are also charged with not cooperating with NCAA investigators. In its response, UNC said it has no way to compel the two to cooperate.