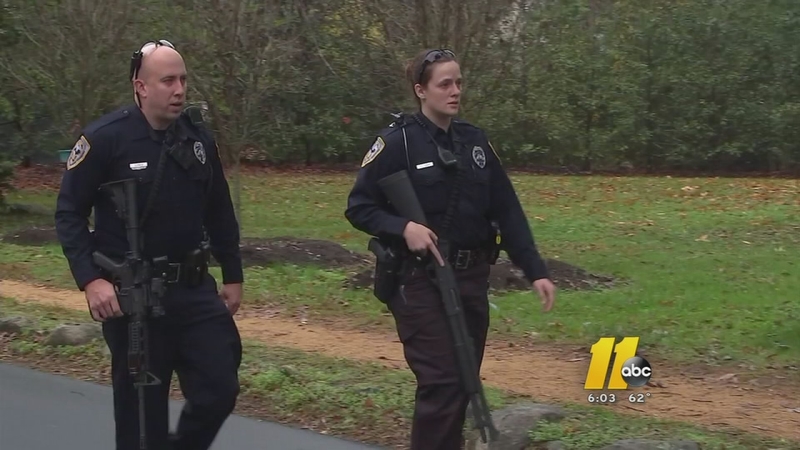 CHAPEL HILL -- A lockdown at UNC Chapel Hill was lifted Wednesday morning after police received a 911 call of an armed and dangerous person on or near campus.

About an hour after the all clear was lifted multiple police cars converged on Battle Lane with guns drawn by the officers. ABC11 was told police were responding to a shots fired call and when they arrived on scene they found a person using an air rifle to shoot at a squirrel on his private property. The incident is unrelated to the campus lockdown earlier in the morning.

UNC Public Safety Department Chief Jeff McCracken said at a press conference following the two incidents that there did not appear to be a threat to campus.

He said officers were unable to find an assailant after Orange County Central Command received a 911 call at 8:22 a.m. about a man and a gun.


An Alert Carolina was sent out about 20 minutes later warning that the university was on lockdown. Sirens were also activated on campus out of an abundance of caution, according to McCracken.

The lockdown was lifted around 9:15 a.m. after the area around the ROTC building at 221 South Columbia Street and Venable Hall were searched.

During the incident officers were seen with guns drawn across campus.

Officers were seen with guns drawn during a lockdown of UNC Chapel Hill's campus Wednesday morning after a report of a "dangerous person.

The chief said they appreciate anyone who takes heed after a warning no matter the outcome.

"We don't know what we are dealing with until we investigate," McCracken said.

UNC activates sirens on campus "when there is a significant emergency or immediate health or safety threat to the campus community." University operations are also temporarily suspended until the all clear is given.