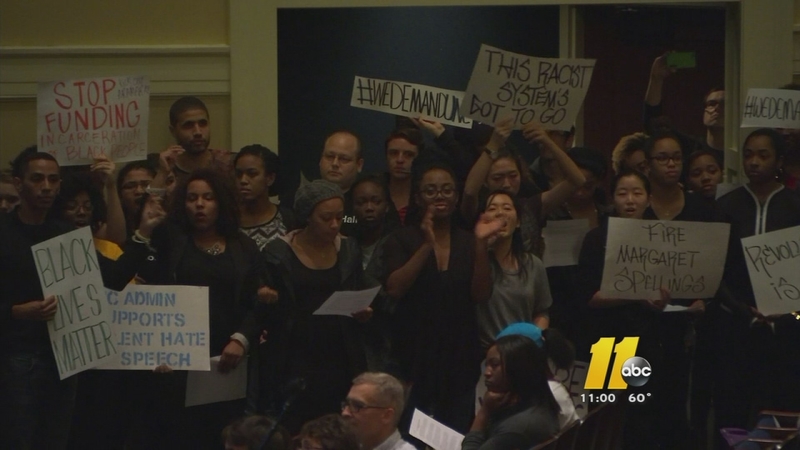 CHAPEL HILL (WTVD) -- A UNC town hall meeting on race relations on college campuses was disrupted Thursday evening by a group of students who took over the event and read off a lengthy list of 50 demands.

The list of demands titled "A collective Response to Anti-blackness" labels UNC Chapel Hill as an "unethical institution" which exploits labor, runs an "athletic industrial complex", and treats people of color as "less than essential to the everyday running of UNC."

The demands rang from the removal of the new system president, mandatory training for students and staff on the "historical racial violence of the university", banning the use of standardized tests like the SAT for college admission, more transparency when it comes to graduation rates, and free access to all school cafeterias and gyms for all North Carolina residents.

But some of the items on the list seemed odd to some who attended the meeting.

"I don't think you should be making demands if they're not feasible," said UNC student Diamonde Henderson.

Henderson said while she may agree on a few points the group made, she was upset they took up more than an hour of the two hour forum listing demands she said were unreasonable to the university.

"The purpose of it was so everyone could share all of their ideas," said Henderson.

Race relations have been an ongoing conversation on campus. Just this year, the school has seen a renewed fight against Silent Sam - a Confederate memorial that has been vandalized several times.

Most recently, it came up again after the University of Missouri president stepped down - accused of not addressing issues of racism.

Once the group of protesters left the forum, other students shared stories of feeling excluded on campus and ideas on how students can celebrate and learn about each other's differences.

Taking in every one of the comments was UNC Chancellor Carol Folt, who sat in the front row.

"Many things they raised are things we're working on all the time and will continue to work on, so I think it gave me some good ideas and direction," said Folt.