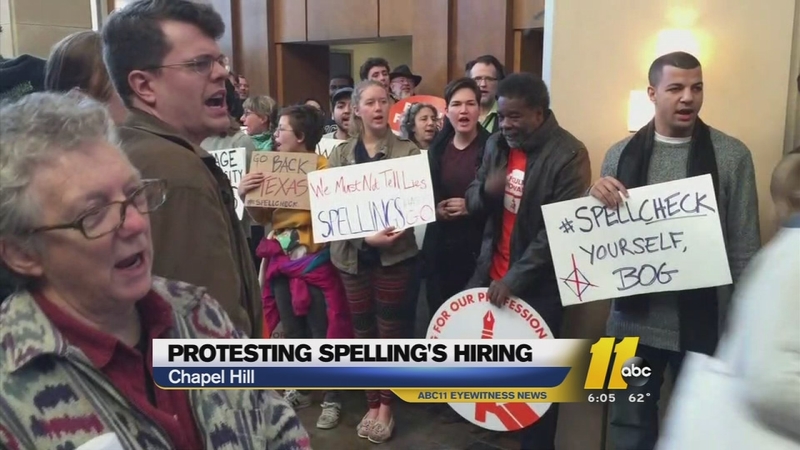 Protesters interrupt Board of Governors

CHAPEL HILL (WTVD) -- More than a hundred people crowded into the lobby outside the Board of Governors meeting. Their protest chants were loud enough to be heard down the hall and through the closed doors where the board members were gathered.

Bd member (Kotis) asks if 'something can be done' about loud protest chants outside. Chair says no. #ABC11Eyewitness pic.twitter.com/SPZU3Fp2Qp

They gave speeches. A professor at N.C. Central told the crowd Spellings represents a "clear, present and imminent danger" to Historically Black Colleges and Universities.

A student at UNC said she's queer and worried about comments Spellings has made that she perceived as troublesome. A professor at Appalachian State said her participation on two corporate boards suggests she wants to privatize public education.

Inside the meeting, protesters were making their voices heard as well.

Seven people, dressed in orange t-shirts, stood up one after another complaining about Spellings. One by one, they were led away by police. Among them, Michael Behrent, a professor at Appalachian State and member of the group Faculty Forward, which has been trying to oust Spellings before she starts in March.

"It's outrageous that someone with this kind of background has been chosen to be the head of the system," said Behrent. "But I think the board of governors did this deliberately. I think that Margaret Spellings represents precisely their vision for what the UNC System should become."

After the meeting, outgoing system President Tom Ross and Board Chair Lou Bissette defended the selection of Spellings and pushed back on protester concerns.

Critics worry Spellings will push the UNC System toward privatization.

"She's an incredible person," Bissette continued. "You get to know her, she's down to earth, she's got a great sense of humor, she's tough, she knows higher education policy like very few people in this country know it. She's got great connections, and she's been on the board of the Gates Foundation. She's going to be a great president I believe."

As for specific protester concerns, Bissette said he knew "nothing about" the allegations that Spellings had a poor record with HSBCUs and was "certain" Spellings didn't have a record to "indicate biases regarding LGBTQ issues."

Bissette also suggested the protest wasn't representative of the overall level of support for Spellings. "We have 225,000 students in the system. We have 14,000 faculty members in the system, and I'm not sure how many people were out there today but it certainly was a small fraction of those constituencies."

"I don't think the kind of disruptive action inside the board meeting today helps anybody," Bissette later added. "I certainly don't think when the people of North Carolina see that kind of activity, they're going to feel much better about the faculty. I think that hurts them as much as it hurts us. It's not a constructive thing to do."

Bissette said Margaret Spellings will absolutely be starting in March.

The protesters who were removed from the meeting weren't arrested or charged. They were given trespassing warnings and banned - for life - from the building where the meeting took place.