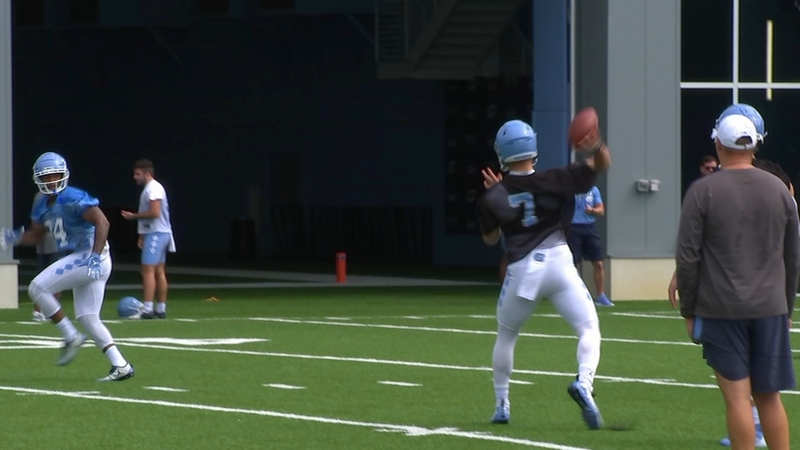 CHAPEL HILL, N.C. (WTVD) -- After months of wondering, the North Carolina football team has finally decided on a starting quarterback.

Howell proved to the coaches he has the best combination of arm strength and athletic ability between the three quarterbacks.

"We've been looking at our quarterback situation very closely," head coach Mack Brown said."And we're concerned about not having enough leadership on offense and one of your true leaders has to be your quarterback. The guys are in a tough spot because all three of them are good enough and all three of them are working hard enough, but Sam Howell will start taking the snaps with the blue team, our first team."

Brown did say the quarterback situation could change before the opener on August 31 against South Carolina.

"The difference right now is Sam has been more consistent than the other two," Brown said. "And Jace has had some up-and-down injuries and Cade's had a bit of a sore arm, too, and Sam hasn't been hurt."
Report a correction or typo
Related topics:
sportschapel hillunc tar heels
Copyright © 2022 WTVD-TV. All Rights Reserved.
TOP STORIES
Monkeypox: What is it? Health experts answer common questions
NC residents, organizations divided on Roe v. Wade ruling impact
Where abortion rights stand in NC after Roe v Wade decision
With Roe dead, some fear rollback of LGBTQ+ and other rights
Brian Laundrie confession letter released: 'I ended her life'
Supreme Court overturns Roe in landmark case on abortion rights
False claims about abortion after Roe v. Wade case
Show More
Biden vows to 'do all in my power' to protect abortion access
NC politicians react to Supreme Court overturning Roe v Wade
Congress sends landmark gun violence compromise to Biden
How personal data could be used to enforce anti-abortion laws
How outlawing abortion could worsen maternal mortality crisis
More TOP STORIES News