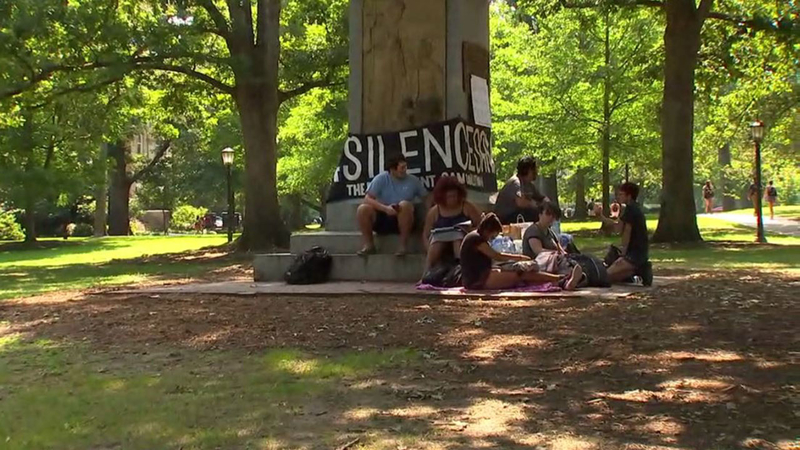 CHAPEL HILL, North Carolina (WTVD) -- Chanting "tear it down," hundreds of protesters gathered around the barricaded 'Silent Sam' at the University of North Carolina at Chapel Hill on Tuesday evening to call for the removal of the Confederate statue. A handful of protesters remained Wednesday morning.

The latest:
* Three people taken into custody
* Protesters stage sit-in outside barricade-protected monument - some still remain Wednesday
* The University says it is caught in a legal dilemma

The person arrested off campus by Chapel Hill police was 19-year-old Claude Wilson, who is a student at UNC.

He has been charged with resist delay and obstruct, and was released overnight.

Authorities have not released information about the other two people arrested.

Less than a dozen UNC students remained at the site Wednesday after opponents of the Silent Sam Confederate statue protested overnight.

"We actually have a schedule when someone's gonna be out here in shifts," UNC junior Rehana Ward-Cooper said. "We've camped out for Duke tickets before. Why not camp out for civil rights?"

"As a University, the free exchange of ideas under the First Amendment is core to our mission," said Joanne Peters Denny, UNC-CH spokesperson. "Carolina has long been a hospitable forum and meeting place for the peaceful dissemination of differing views. It's important to note that the vast majority of those who attended tonight's rally honored that tradition.

"Unfortunately some individuals did not behave in this spirit. University police arrested two individuals who were not affiliated with the University," she added.

Crowd is now marching back up Franklin toward #SilentSam statue pic.twitter.com/HKOgyJOHdV

Police directed traffic as protesters marched and chanted. The crowd made its way back to the Silent Sam statue and continued to chant in protest. Some demonstrators rattled the barricades surrounding the statue.

Raw video: Man with face covered gets taken into custody.

The gathering was boisterous but largely peaceful. One man, who put a bandanna on his face, was led away by authorities.

"The safety of our campus and the community is our top priority and we thank the town, the county and the state for their support in this effort," Peters Denny said.

Before the protest "officially" began at 7 p.m., some in the crowd engaged in spirited debate about whether the statue should stay or go.

The Confederate memorial known as "Silent Sam" faces Franklin Street, just a short walk away from the road. In a letter to Governor Roy Cooper earlier this week, UNC system leaders expressed concern about the statue and public safety, saying it is only a matter of time before an attempt is made to pull it down in the same way a statue in downtown Durham was destroyed last week.

Under a law passed by the General Assemble and signed by then-Governor Pat McCrory in 2015, only the N.C. Historical Commission can give approval for Confederate monuments to be moved.

Responding to UNC officials, Governor Cooper said they can move the statue.

"If our University leaders believe there is real risk to public safety, the law allows them to take immediate measures," wrote Cooper.

But on Tuesday afternoon, the university said that it "has not been given the clear legal authority to act unilaterally. Governor Cooper cites a provision where removal would be permitted if a "building inspector" concludes that physical disrepair of a statue threatens public safety, a situation not present here."

The university added that it is "now caught between conflicting legal interpretations of the statute from the Governor and other legal experts."

In a letter from UNC's chancellor, vice chancellor, and chief of police that alerted the campus community to the possibility of a rally, leaders echo concerns raised by Chapel Hill Mayor Pam Hemminger about safety on campus.

The letter says if campus authorities had the ability to immediately move the statue for safety reasons, they would.

"Based on law enforcement agencies' assessments, we continue to believe that removing the Confederate Monument is in the best interest of the safety of our campus, but the university can act only in accordance with the laws of the state of North Carolina," the University said Tuesday afternoon. "As we continue to seek clear guidance and legal authority to act, we ask for your patience and cooperation to help us maintain as safe an environment as we possibly can. Your safety and the safety of our community will always be our first priority."

Cooper has called for the removal of Confederate memorials statewide.

Chapel Hill's mayor wants the statue relocated from the campus location to a building somewhere in town where it can be used as a teaching aid.

The Silent Sam statue has been the target of vandals several times in recent years.

"I am pleased the University of North Carolina responded to threats of criminal vandalism in the measured and thoughtful manner our state can expect from one of the leading universities in the world," Moore said. "It is clear their utmost priority is the public's safety and the protection of the campus community.