UNC students continue to demand the university rename a building on campus, named after a leader of the KKK. They rallied outside Saunders Hall Monday.

CHAPEL HILL, N.C. (WTVD) -- UNC students continue to demand the university rename a building on campus, named after a leader of the KKK.

Monday's rally outside Saunders Hall is one of many demonstration students say they're going to organize until the name on the building comes down.

Students wore nooses around their necks and held signs that read, "This is what Saunders would do to me."

"We're reclaiming this space in a way that sort of honors us and says that we deserve to be here," said student Matt Taylor.

The academic building was named in 1922 after William Saunders. Saunders was a UNC graduate who went on to become N.C. Secretary of State.

In the late 1800s, Saunders was known in North Carolina as the chief leader of the Ku Klux Klan. Minority students and activists are demanding the building's name be changed. They argue it does not reflect the university that prides itself on diversity.

"If UNC is as inclusive as it says it is. If it promotes diversity like it wants to. It needs to make us feel welcome as students while we're here. Not just give the appearance on like brochures and things of that nature," said Taylor.

The students want the university to rename the building after African-American author Zora Neale Hurston, best known for her novel "Their Eyes Were Watching God."

Chancellor Carol Folt released the following statement ahead of a rally on Friday:

"I have spoken to many student groups across campus and listened to our faculty, staff and alumni who have expressed their different perspectives on the issue surrounding Saunders Hall. A part of Carolina's history is inextricably linked with difficult issues of race and class, and how we address those issues today is important. The Board of Trustees is taking a close look at how we can best move forward, guided by their policy on renaming campus buildings.

In the meantime, we will create and support opportunities for respectful dialogue, and we will work even harder to help our community demonstrate our commitment to Carolina's core values of inclusion and respect."

"If the benefactor's or honoree's reputation changes substantially so that the continued use of that name may compromise the public trust, dishonor the University's standards, or otherwise be contrary to the best interests of the University, the naming may be revoked. However, caution must be taken when, with the passage of time, the standards and achievements deemed to justify a naming action may change and observers of a later age may deem those who conferred a naming honor at an earlier age to have erred. Namings should not be altered simply because later observers would have made different judgments."

Cornelia Phillips Spencer whose name is on UNC's first women's dorm is known for ringing the South Building bell when UNC reopened after reconstruction. However, she was also a segregationist that initially helped to close the university.

That convinced Moeser to remove her name from a prestigious award.

"But I didn't take her name off of a building. There's a subtle distinction there," said Moeser. "I don't think the facts are all in about Saunders. We don't really know if he was a KKK leader, but let's assume he was. Where do we draw the line?"

Moeser points to Silent Sam, a statue of confederate soldier, and campus dorms built by slaves.

"The founders of this university were slave owners... and we celebrate many of them," said Moeser. "I think this is a slippery slope. I think we should tell the whole history of the university -- warts and all. We shouldn't erase history."

Click here for a statement from UNC-Chapel Hill Board of Trustee Chair Lowry Caudill. 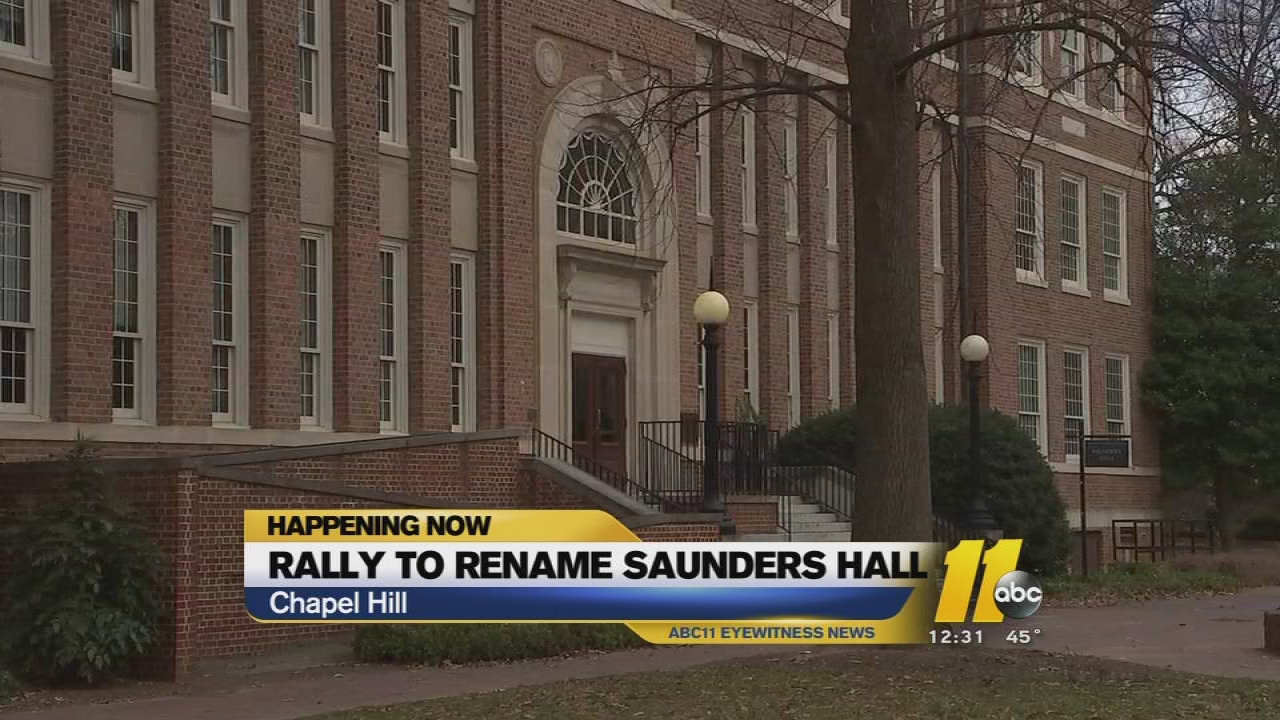