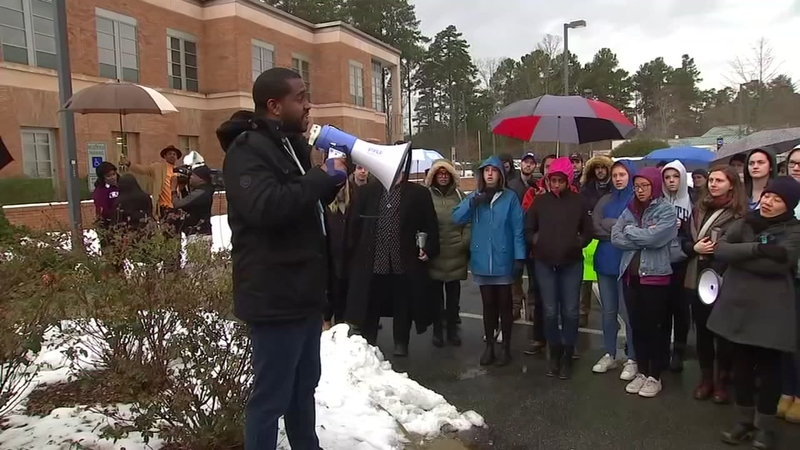 CHAPEL HILL, N.C. (WTVD) -- The UNC Board of Governors said it "cannot support" the plan put forth by the UNC Board of Trustees to spend $5.3 million to house the now-toppled Confederate monument known as Silent Sam.

The Board of Governors met in closed session for more than three hours Friday, debating what to do with the statue.

Board Chairman Harry Smith cited student safety and the large price tag as reasons the university system decided against supporting the plan. However, Smith did not elaborate on a potential alternative plan for the monument.

Smith said that while officials want to get the decision right, state law bars the UNC System from moving Silent Sam off campus.

"To move the statue off the campus would require a general statute change and so, the group will have to decide if that's indeed a path that they want to go down," he said.

“We’re going to go back to the drawing board in a team like approach.” UNC Board Chair says the $5.3 million proposal was a hard pill to swallow for a center to house #SilentSam. #ABC11 pic.twitter.com/ZYkzHMQbQk

Todd Bendor is a professor of city and regional planning and Director of the Odum Institute, which wrote a letter saying the statue shouldn't be anywhere near Odum Village.

"Howard Odum was one of the pioneers of the study of race and poverty in the South and so the idea that you'd move this statue, which has become a very different symbol, of an area that's named after one of the most prominent sociologists in history seems like not like a very good idea," Bendor said.

Smith appointed several members of the board to come up with an alternative plan by Friday, March 15.

"The plan we put forward did meet the letter of the charge from the Board of Governors but hasn't satisfied anyone, and we recognize that," Chancellor Carol L. Folt said in a statement. "We have a responsibility to make wonderful things happen on our campus - to enrich the life and prosperity, the health and well-being of the people of our state. But even more so, to be a place where the students, the staff and faculty who power the University, can thrive and feel safe."

She continued: "We are the only university in this state that has anything closely resembling this statue. Put here more than one hundred years ago, our community is carrying the burden of an artifact, given to us by a previous generation in a different time. The burden of the statue has been and still is disproportionately shouldered by African Americans. No university today would even consider placing such an artifact on their campuses."

Folt said the university will continue to work to find the best solution.

"I think a lot of people are just sick of this are just tired of the ongoing controversy with this," Bendor said. "I think it makes the university look bad."

The Confederate monument, which was toppled in August, had stood front and center at UNC-Chapel Hill's campus since 1913.

Related: Who is Silent Sam

They carried signs and chanted against white supremacy.

"Where it (Silent Sam) goes is really secondary to the fact that it has no place on campus," Lucy Lewis, UNC alumnus and former employee, said. "This is a public university and it's responsibility is to be a welcoming environment, a safe environment for all of our students, and we call on the Board of Governors and the Board of Trustees to stand by that and get rid of the statue forever."

The protesters said they disagreed with the Board of Trustees' proposal to move Silent Sam out of public view and into a yet-to-be-built building on campus.

"When they talk about jurisdiction having to be the campus, it doesn't have to be the campus," Lewis explained. "It could be Orange County. It could be North Carolina. When they say we're not going to put it in a museum they're creating an educational center, but really it's about a shrine. It's a museum."

Officers at the protest tell me one person has already been arrested. The person set up a tent over protestors and didn’t want to move it. #ABC11 pic.twitter.com/iEDlpdKFnD

The protest wrapped up around 9 a.m., and some of the protesters said they planned to head to the jail to support their friend who was arrested.

On Dec. 3, UNC's Board of Trustees unveiled a $5.3 million plan to build a history and education center on campus to house the monument.

Many students and faculty members are not happy with the Board of Trustees' plan. More than 100 current and former student-athletes signed a petition calling for the permanent removal of Silent Sam.

"I don't know what the forces are that are really behind the scenes on this, but I think it's a controversy we eventually have to move past, because there are so many other important things we could be worrying about," Bendor said.

A group of protestors against the new plan for Silent Sam gathered in Chapel Hill on Monday night and blocked traffic on Franklin Street.