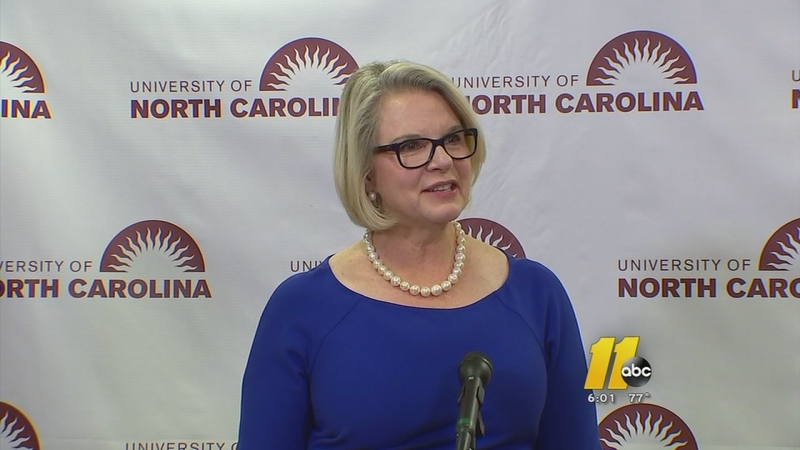 CHAPEL HILL, NC (WTVD) -- The UNC Board of Governors announced their unanimous support for their candidate for the next president of the 17-campus University of North Carolina system Friday morning.

Shortly after 11, the board went into a closed session. Just before noon, the board announced that they support Margaret Spellings, who served as Secretary of Education under President George Bush.

RELATED: Who is Margaret Spellings

Spellings was unanimously elected to lead the UNC system minutes after the board announced their recommendation. Spellings addressed the crowd, saying in part:

I believe, as I'm sure all of you do, that there is no more important area of public policy than education. It is not an overstatement to say that education is not only fundamental to each individual North Carolinian, but to the success and future of this state, our country, and to peace and stability in the world.

I believe this with every fiber of my being. And that is why I will work tirelessly with all of you to ensure that each and every student in North Carolina has not only access to higher education, but the skills and abilities to fully access the American Dream.

.@MargaretEdu admits she's not an academic, but says she's about public policy, asks critics to give her a chance. pic.twitter.com/HOoVs1SIqO

Spellings is replacing current President Tom Ross, who is being pushed out of the job early next year by university governing board members who said they wanted a change.

Spellings will have an annual salary of $775,000. UNC will contribute $77,500 annually to her retirement fund, and will grant her $35,000 toward moving costs and car allowance.

During her tenure as Education Secretary, Spellings spoke out against a federally funded children's television program that featured gay characters.

"I have no comment about those lifestyles. If you're referring to the issue, when early in my tenure as Secretary of Education, we had a controversy over funding for a program called 'Buster the Bunny' that was targeted at preschool children," Spellings said. "That's a matter of how we use taxpayer dollars, not any particular view that I have on any particular groups of people or individuals."

Faculty representatives for North Carolina's public university system said Thursday the next president of the 17-campus system will take the job with extra baggage by failing to meet with teachers and researchers first.

"I expect the faculty to react well to my appointment. I have skills that are different from theirs. I'm not an academic and I'm not a teacher, I'm not a researcher. I'm somebody who understands public policymaking," Spellings said.

Gov. Pat McCrory issued the following statement after the announcement was made:

"As governor I welcome Margaret Spellings to North Carolina and look forward to a great working relationship to further connect our students to unlimited educational and career opportunities so they can each fulfill their potential in our great state."

"We congratulate Margaret Spellings on her election as president of the University of North Carolina system, welcome her to our great state and look forward to meeting her. She has been a leader in public education at the highest level, and we trust she shares our passion for making our university system the best in the nation."

A statement issued by the UNC Faculty Assembly ahead of Friday's vote on a new president complains that professors and others should have been able to meet and measure candidates during the confidential selection process. The statement signed by the group's top officers said the secretive search by the UNC Board of Governors and the top candidate's indifference to meeting in advance will make the new president's job harder.

"No student attends our campuses, no funding agency or organization provides grants of research support, and no business, governmental entity, or civic organization has come to our institutions seeking public service expertise, because of the teaching, research and service achievements of the Board of Governors or the president of the university," the statement said. "Yet the board continues to act without the advice and counsel of the constituencies whose expertise they need to effectively govern the institution."

The statement was signed by Faculty Assembly chairman Stephen Leonard, a political science professor at UNC-Chapel Hill, and Gabriel Lugo, a mathematics professor at UNC-Wilmington and the group's chair-elect.

Some board members and legislative leaders have complained the selection is being speeded up to beat an end-of-the-month deadline after which the UNC governors could be required to consider at least three candidates before choosing a new president.

RIGHT NOW: At least one demonstrator on hand armed with a sign calling the UNC BOG "Bully Boys." pic.twitter.com/hPR42lc7xA

State Senate leader Phil Berger, R-Rockingham, and House Speaker Tim Moore, R-Cleveland, last week warned the university board that failing to consider multiple candidates "would not be viewed favorably." The board is selected entirely by lawmakers.

"I will take them at their word that they are going to present to the board three serious candidates, and we'll see," Berger said.