James Fields is accused of driving a car into a crowd of people peacefully protesting a white nationalist rally Saturday in a Virginia college town, killing a 32-year-old woman.

CHARLOTTESVILLE, Virginia (WTVD) -- Officials have identified the suspect being held in a Virginia jail in connection with a deadly crash near a scheduled rally of white nationalists as James Alex Fields Jr., 20, of Maumee, Ohio.

Fields is being held on suspicion of second-degree murder, malicious wounding, and failure to stop in an accident that resulted in death.

He is accused of driving a car into a crowd of people peacefully protesting a white nationalist rally Saturday in a Virginia college town, killing a 32-year-old woman, sending at least 26 others to hospitals and ratcheting up tension in an increasingly violent confrontation.

* Police identify suspect* Trump comments: "It has no place in America. What is vital now is a swift restoration of law and order."* Trump hold news conference; signs VA Choice Quality Employment Act & commented on the protest

Gov. Roy Cooper commented about the incident saying, "The tragedy in Charlottesville today has no place in our society. Valuing diversity makes us stronger."

A helicopter crash that killed the pilot and a passenger later in the afternoon outside Charlottesville also was linked to the rally by State Police, though officials did not elaborate on how the crash was connected.

The chaos boiled over at what is believed to be the largest group of white nationalists to come together in a decade: the governor declared a state of emergency, police dressed in riot gear ordered people out and helicopters circled overhead. The group had gathered to protest plans to remove a statue of the Confederate Gen. Robert E. Lee, and others who arrived to protest the racism.

Matt Korbon, a 22-year-old University of Virginia student, said several hundred counter-protesters were marching when "suddenly there was just this tire screeching sound." A silver Dodge Challenger smashed into another car, then backed up, barreling through "a sea of people."

The impact hurled people into the air. Those left standing scattered, screaming and running for safety in different directions.

The turbulence began Friday night when the white nationalists carried torches through the university campus in what they billed as a "pro-white" demonstration. It quickly spiraled into violence Saturday morning. Hundreds of people threw punches, hurled water bottles and unleashed chemical sprays. One person was arrested in connection.

President Donald Trump condemned "in the strongest possible terms" what he called an "egregious display of hatred, bigotry, and violence on many sides" after the clashes. He called for "a swift restoration of law and order and the protection of innocent lives."

Trump says he's spoken with the governor of Virginia, Terry McAuliffe, and "we agreed that the hate and the division must stop and must stop right now."

But some of the white nationalists cited Trump's victory as validation for their beliefs, and Trump's critics pointed to the president's racially tinged rhetoric as exploiting the nation's festering racial tension.

"We are in a very dangerous place right now," he said.

Right-wing blogger Jason Kessler had called for what he termed a "pro-white" rally in Charlottesville. White nationalists and their opponents promoted the event for weeks.

The white nationalist organizations Vanguard America and Identity Evropa; the Southern nationalist League of the South; the National Socialist Movement; the Traditionalist Workers Party; and the Fraternal Order of Alt Knights also were on hand, he said, along with several groups with a smaller presence.

On the other side, anti-fascist demonstrators also gathered in Charlottesville, but they generally aren't organized like white nationalist factions, said Heidi Beirich of the Southern Poverty Law Center.

Many others were just locals caught in the fray.

Colleen Cook, 26, stood on a curb shouting at the rally attendees to go home.

Cook, a teacher who attended the University of Virginia, said she sent her son, who is black, out of town for the weekend.

"This isn't how he should have to grow up," she said.

Cliff Erickson leaned against a fence and took in the scene. He said he thinks removing the statue amounts to erasing history and said the "counter-protesters are crazier than the alt-right."

"Both sides are hoping for a confrontation," he said. 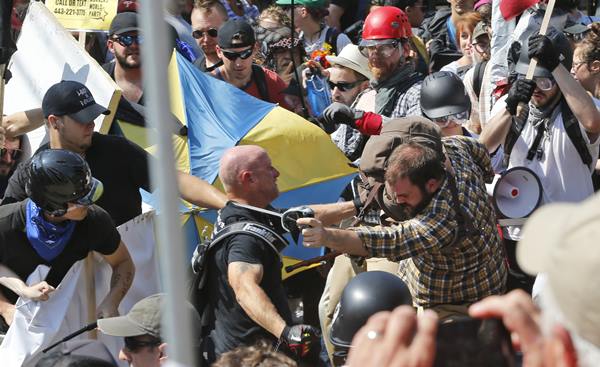 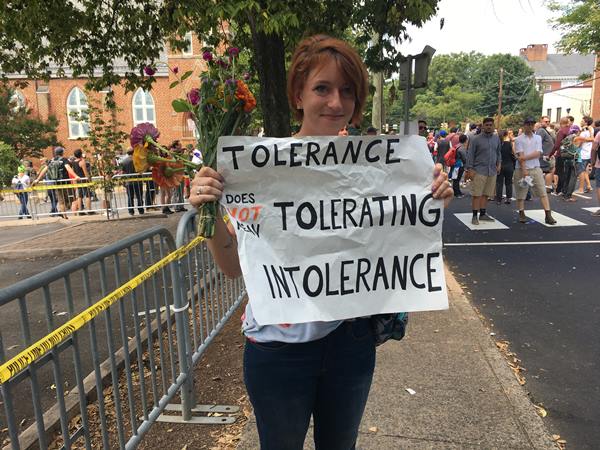 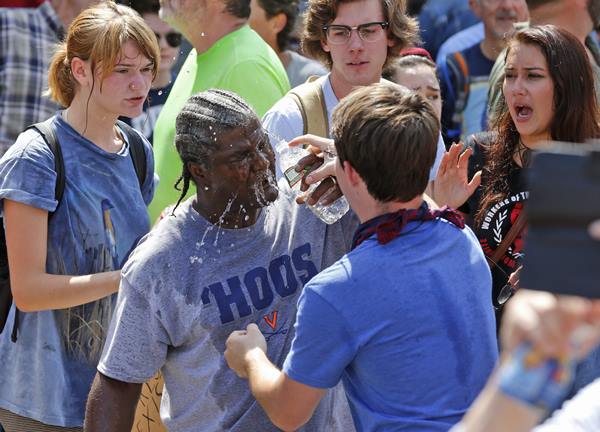 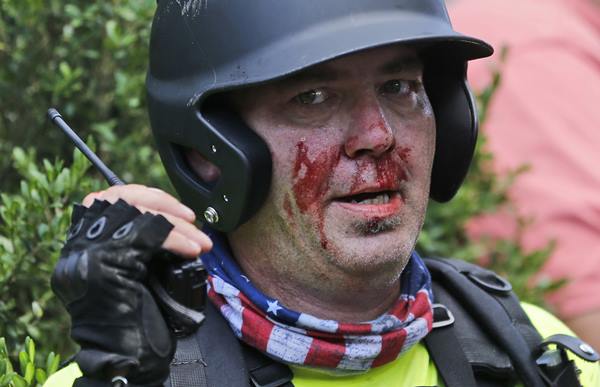 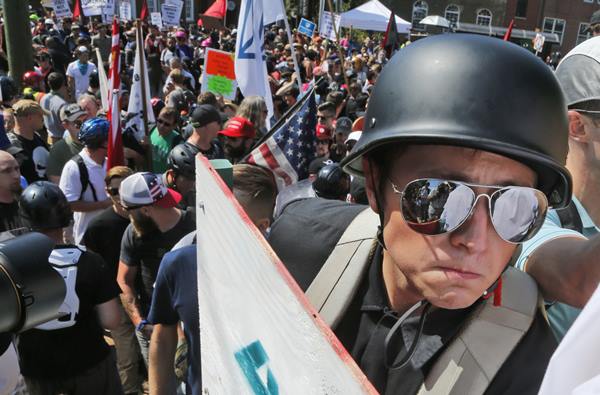 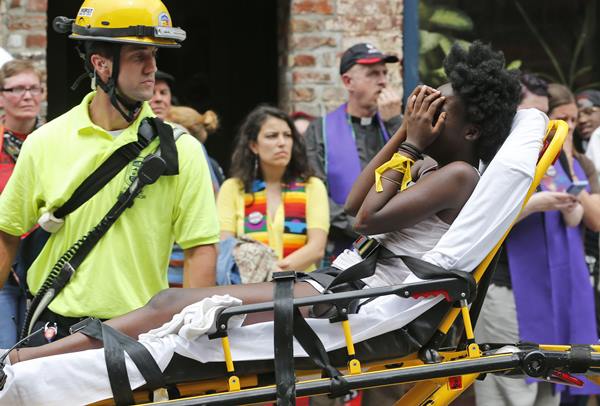 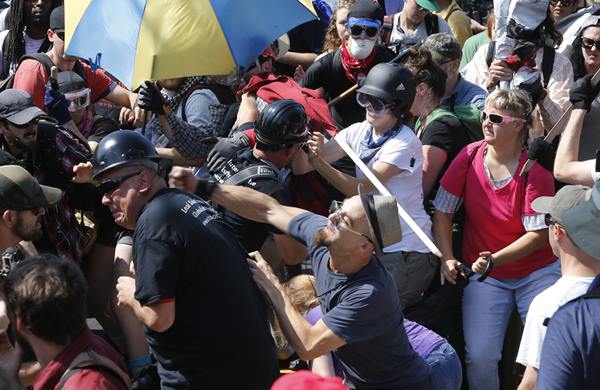 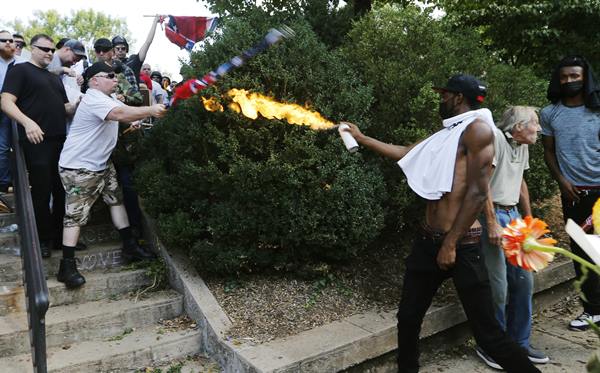 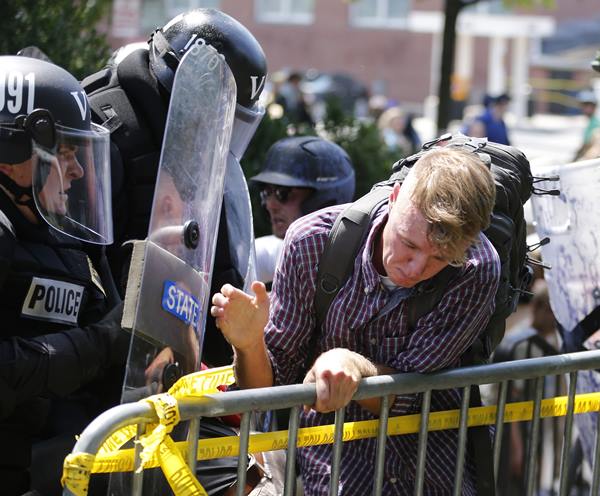 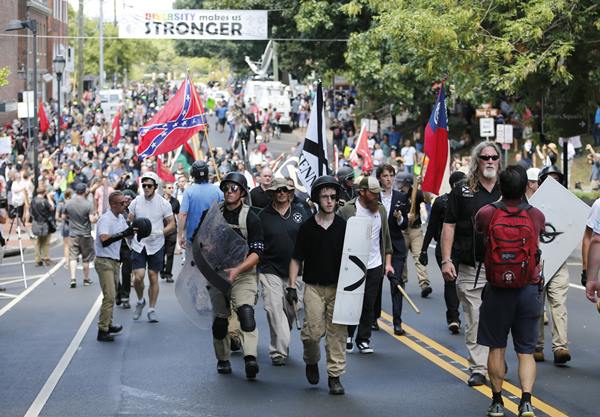 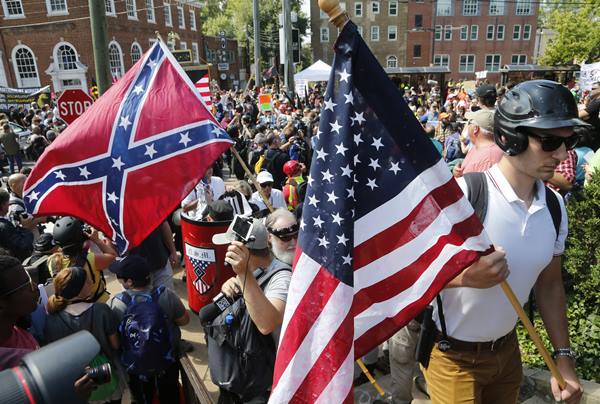 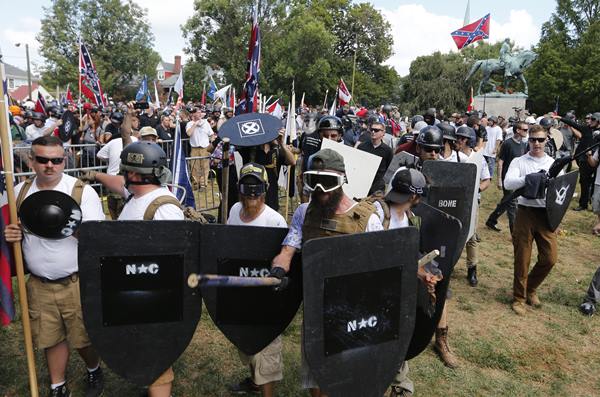 It's the latest confrontation in Charlottesville since the city about 100 miles outside of Washington, D.C., voted earlier this year to remove a statue of Lee.

In May, a torch-wielding group that included prominent white nationalist Richard Spencer gathered around the statue for a nighttime protest, and in July, about 50 members of a North Carolina-based KKK group traveled there for a rally, where they were met by hundreds of counter-protesters.

Kessler said this week that the rally is partly about the removal of Confederate symbols but also about free speech and "advocating for white people."

"This is about an anti-white climate within the Western world and the need for white people to have advocacy like other groups do," he said in an interview.

Charlottesville Mayor Michael Signer said he was disgusted that the white nationalists had come to his town and blamed Trump for inflaming racial prejudices.

"I'm not going to make any bones about it. I place the blame for a lot of what you're seeing in American today right at the doorstep of the White House and the people around the president," he said.

Charlottesville, nestled in the foothills of the Blue Ridge Mountains, is a liberal-leaning city that's home to the flagship University of Virginia and Monticello, the home of Thomas Jefferson.

The statue's removal is part of a broader city effort to change the way Charlottesville's history of race is told in public spaces. The city has also renamed Lee Park, where the statue stands, and Jackson Park, named for Confederate General Thomas "Stonewall" Jackson. They're now called Emancipation Park and Justice Park, respectively.

For now, the Lee statue remains. A group called the Monument Fund filed a lawsuit arguing that removing the statue would violate a state law governing war memorials. A judge has agreed to temporarily block the city from removing the statue for six months.

The Associated Press contributed to this article.