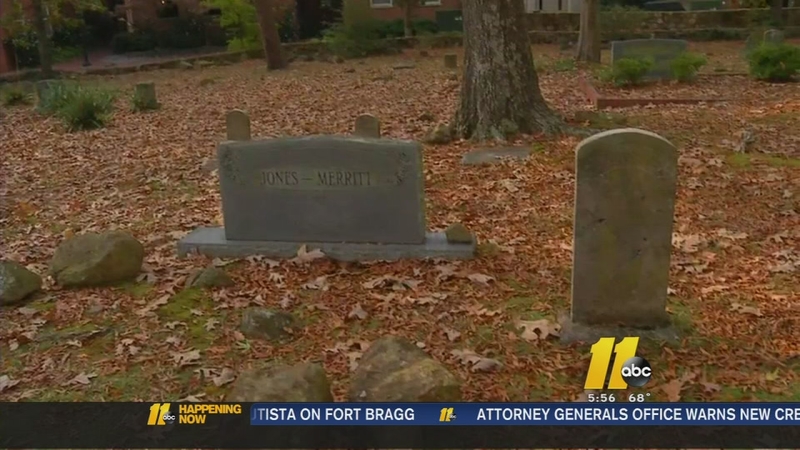 CHAPEL HILL N.C. (WTVD) -- After nearly five years of study, hundreds of unmarked graves have been found at the Chapel Hill cemetery near the center of the UNC campus. While the campus surrounds the cemetery, it's owned by the Town of Chapel Hill, which maintains it.

Most of the unmarked graves that were discovered are in the African American section of the cemetery and many could be the graves of slaves, according to Cheri Szcodronski, the Executive Director of Preservation Chapel Hill, and the organization that ordered the study.

"We focused on these two sections, A and B , which are known to be the African American sections and part of section one, where we believe the poorest whites were buried and also would be unmarked graves, and we found 475 unmarked graves in those two and a half sections.

.@Preservation_CH finds 475 unmarked graves at the cemetery near @UNC, most in the African American section. pic.twitter.com/zEoIbfAkCD

"The reason we have so many unmarked graves is that usually there would've been something temporary," Szcodronski said. "So there might of been a wooden cross that would've deteriorated by this point, or there might of been a fieldstone that somebody didn't realize was a headstone, or grave marker, and they moved or put into the stonewalls or something like that."

Szcodronski said fieldstones, trees, and yucca plants are all some of the temporary markers that have been found in the space, but that much of that could have been disturbed, as the space was used for football game parking in the 1980s.

"It's sort of a sad story that we're looking at people who've been completely forgotten, both in life and now in death," Szcodronski said. "Our hearts sort of tell us that we should mark them with stones, but we also don't want to erase the story of segregation and slavery and Jim Crow and the things that lead to the landscape looking the way that it does now."

Szcodronski said Preservation Chapel Hill used ground penetrating radar, electrical resistance, and some ground probing to find the forgotten graves, and debated on whether or not place new markers at site of the newly discovered graves, and ultimately decided against it.

The organization opted to place rebar stakes in the ground instead, so the locations can still be found with a metal detector, while still preserving the history of the burials.

"So leaving the landscape sort of empty like this gives you a physical feeling. You can look out here and get a sense of their forgotteness and how pushed out of society those people really were," Szcodronski said. "And that's an important story to remember. We've all heard the cliche 'we have to know our history so we don't repeat it,' well we can see our history out here so we don't repeat it."

"We understand what we see on the other side of the cemetery - we see wrought iron fences, we see tombs above the ground, we see carved and polished headstones, and that's what we expect to see in a cemetery.

"The other side of that though is these people who weren't deemed good enough to have that after they had passed on."