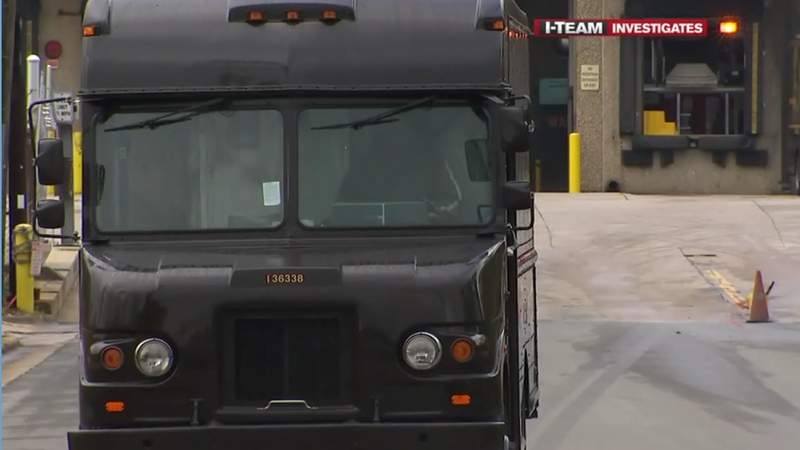 CHAPEL HILL, North Carolina (WTVD) -- Rodney Robinson drove for UPS for nearly three decades at the UPS distribution center in Chapel Hill. He was a union shop steward for eight years, and, as he says, held in good standing by the company. "I was a circle of honor driver, he said. "That's very hard to do." He said that meant he drove for 25 years without an accident. "You're put in a club. The Circle of Honor club."

That started changing, he said, in 2013 when he started complaining about the fact UPS wouldn't change his hours, something he says is clearly allowed in union rules. "When I started filing grievances, in February 2013, that's when all the disciplinary action started to come to me," said Rodney Robinson.

Three years and 40 grievances later, Robinson was fired, in part, for running a stop sign in an apartment complex.

"They look for nitpicky, harassing charges to come after you," he said. "They use observations to terminate people. You didn't blow your horn loud enough. You walked in front of a package care versus walking behind it. You didn't pull your mirrors in. The company calls them method or procedural infractions."

"200,000 UPS drivers go on the roads each day," Robinson continued. "If you were to watch all those drivers, you'll see countless errors and mistakes. We're human beings. They're firing people for filing an info notice improperly. You know the notice you leave on the door for a customer? You make a simple error on an info notice and that is a means to terminate you. They build up enough of these charges, they take you to arbitration and have you terminated."

At the center of the claims made by Robinson and other drivers, the charge that UPS treats black drivers differently and more harshly than white drivers.

In 2016, Robinson filed three separate complaints against UPS with the Equal Employment Opportunity Commission alleging discrimination based on age and race, as well as allegations of retaliation from the company.

UPS responded to the allegations with a letter to the EEOC calling them "frivolous" and saying Robinson was fired for violating basic safety rules. UPS also claimed in its response that Robinson had a history of performance problems pre-dating his first federal complaint and noted that his termination was upheld in arbitration.

Robinson challenged the company's response. "As a Circle of Honor driver," he said, "I was a perfect driver, so to speak." Robinson filed a lawsuit against UPS last week.

He's not the first driver in the Triangle to make claims of discrimination against the company. Last year, another former Chapel Hill UPS driver named Glenwood Robinson (no relation) sued the company, claiming discrimination based on race. His court filing makes specific allegations of instances where he says white drivers were treated differently than black drivers.

Again, UPS pushed back, highlighting Robinson's work record. The company's legal response described it as "the worst" among Chapel Hill drivers and said he failed to follow safety protocols and engaged in unprofessional conduct. His termination was also upheld in arbitration.

But another former driver who came forward to the I-Team, Anthony Dunn, says he believes UPS' corporate behavior fits a pattern.

Dunn, a black driver, said he was treated differently than a white driver in a very similar situation. "They fired me because I hit a wall and didn't report it in a timely fashion," Dunn said. As it's reported in Dunn's EEOC filing, Dunn told the company about it 45 minutes later. UPS said in its response that it was a fireable offense.

The EEOC didn't rule on Dunn's case but it did say he could file a lawsuit in court if he wanted. His time for that ran out after 90 days.

"Most people don't have 30-40 thousand dollars to go up against a major company like UPS," said Anthony Dunn. "Even though you got proof."

No one at the company would talk to ABC11 on camera but spokesperson Dan McMackin emailed this statement: "UPS does not tolerate any form of discrimination in the workplace and takes all employee concerns seriously. Regarding the allegations of discrimination or harassment you contacted us about, UPS has thoroughly investigated all claims made by the employees in question and believes there to be no merit in any of them."

These aren't the first allegations of discrimination UPS has faced. Last year, workers in Florida protested outside a UPS distribution center alleging harassment and discrimination; earlier this year, it settled a disability discrimination lawsuit in Illinois; and last year in Kentucky, a jury awarded eight black workers more than $5 million after an effigy was hung in a UPS center there.

"Unless you come together collectively," Dunn said, "there's no way you're going to be able to fight to prove the truth that this is going on. We're all living. We continue to have to live our lives. When you get fired, you're on fire to do something to get revenge on this company. That lasts two to three months. But meanwhile, you're real life will kick in. I got a mortgage over here. I need to eat. So you kind of dribble off until you get one foul ball that gets you back up again."

"I'm hoping and praying that we can get this class action together," said Rodney Robinson. Like other drivers we talked to, Robinson sees the courts as one of their last remedies. "We have to," he said. "It's got to change. Not so much for us but for the next group of drivers to come along."

ABC11 has decided to slowly reduce the number of stories on the website that have a comments section. We believe very strongly that our audience should have an opportunity to discuss and debate events in our world, however, we have not been able to moderate the comments as well as we would like. Instead of hosting a platform that could allow a few loud and ugly voices to dominate a conversation, we want to encourage everyone to join us on our social media platforms and speak out there. Facebook: facebook.com/ABC11 Twitter: twitter.com/ABC11_WTVD
Report a correction or typo
Related topics:
businesschapel hilliteamdiscriminationups
Copyright © 2022 WTVD-TV. All Rights Reserved.
ITEAM
Number of officer-involved shootings decreased in 2021
Trial over NC voting maps begins Monday
Local governments facing increase in staff vacancies
Surging inflation latest challenge to NC farmers
TOP STORIES
1 dead in crash that closed all lanes of I-85 northbound in Durham
Small airplane crashes in Wake County
May be nearing Omicron peak, UNC doctor says; so what's next?
9-year-old Cary girl receives life-saving liver transplant at Duke
LATEST: Wake County school leaders review updated quarantine guidance
NC airports see spike in number of guns at security checkpoints
Family of man shot by officers on I-440 demands answers
Show More
Teens allowed to drive big rigs in new federal program
2-year-old shot in Harnett County while sitting in car with mother
Transgender community faces higher rates of food insecurity
Free school supply store opens for Wake County teachers
At-home COVID-19 test request website goes live 1 day early
More TOP STORIES News