US Marine arrested on charges of smuggling undocumented immigrants across border 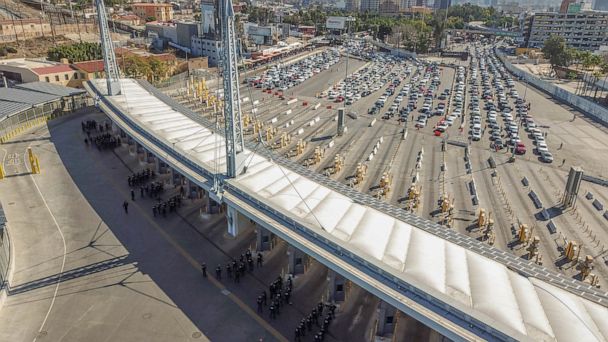 A U.S. Marine was arrested by U.S. Customs and Border Protection on Monday on charges of smuggling undocumented immigrants across the southern border outside of San Diego, according to the Marine Corps.

"On December 2, 2019 at approximately 1:30 a.m., a junior-enlisted Marine with Headquarters Battalion, 1st Marine Division was taken into custody by U.S. Customs and Border Protection (CBP) personnel for allegedly bringing in undocumented immigrants at the San Ysidro port of entry," the Marine Corps said in a statement. "The Marine is currently being held in civilian custody. The determination as to the adjudicating authority has not yet been made."

The Marine Corps said that the Marine arrested on Monday had not served as part of the Trump administration's southwest border support mission. CBP and the Naval Criminal Investigative Service (NCIS) are currently investigating the incident, according to the Marine Corps.

The San Ysidro port of entry is the busiest land border crossing in the western hemisphere, processing an average of 70,000 northbound vehicle passengers and 20,000 northbound pedestrians per day.

The arrest follows the detention of 23 Marines also from 1st Marine Division who were detained in July for human trafficking, drug distribution, and weapons charges. Of those, six have pleaded guilty to charges at courts-martial, according to the service.

"Thirteen Marines submitted and have approved pre-trial agreements requesting separation in lieu of courts-martial or waiving administrative separation boards," the Marine Corps told ABC News in a statement."The remaining four Marines are currently in the process of being adjudicated."

The Marines charged with human trafficking this past summer were alleged to have moved undocumented immigrants from locations within the U.S., not across the border.
Report a correction or typo
Related topics:
abc newsnational
Copyright © 2020 ABC News Internet Ventures.
More Videos
From CNN Newsource affiliates
TOP STORIES