No more heading the ball for young soccer players 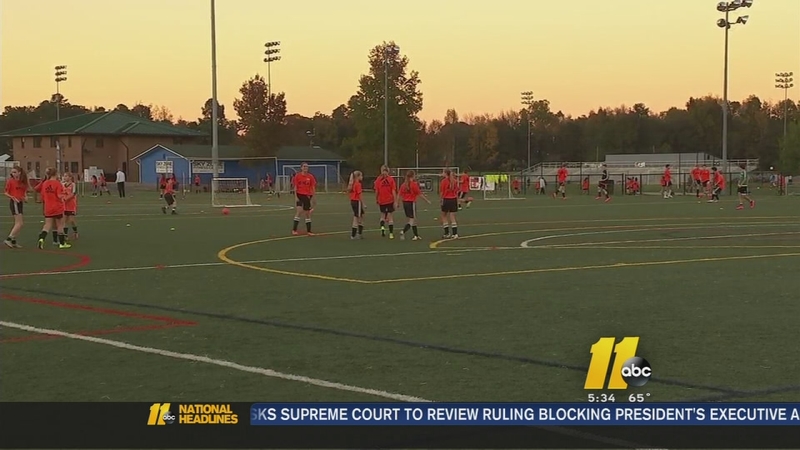 Local league reacts after US Soccer cuts back on heading

RALEIGH NC (WTVD) -- US Soccer wants its youth leagues to cut back on heading, but changes aren't coming in the form of mandates by the federation, but rather, as guidelines for individual leagues.

According to a Statement from US Soccer:


Capital Area Soccer League, a Wake County league with around 9,000 players, says it's on board with recommendation because it's not far from what their teams practice now.

CASL has 3,450 players under the age of 10, and their Lead Programs Director, John Brandford, says those kids aren't practicing heading because the program doesn't introduce the technique until a player is a little older - opting to focus on foot work, technique, and a more basic understating of the game at a younger age.

Tommy Retzlaff is a CASL Coach for a youth girls' team. He said he backs the recommendation because a younger player may not have sufficiently developed neck muscles to counteract the force of an incoming soccer ball.

"Rarely will you see me standing on the sideline saying you've got to head the ball," Retzlaff said. "We have to find ways to work around it, and I'm a strong advocate particularly on the girl side for no-heading 14 and under."

The recommendation comes as a result of a lawsuit against US Soccer, which will also be rolling out a new safety campaign in the months to come.

For now, the heading guidelines are spurring debate online.

Bunch of folks asked me about this today so I'll share my opinion publicly: I don't think eliminating heading in youth soccer is the answer.

As if youth soccer in the U.S wasn't bad enough, they are trying to outlaw heading for kids under 10. What's next a sponge ball? #getagrip

Children 10-and-under are now banned from heading soccer balls? Number of headers in 8-year old soccer games before this rule: about 0.0

FROM THE SOCCER MOMS

RALEIGH, NC - Kristen O'Conner has four boys ranging in age from 17 to 11 years old. They have all been playing soccer since they were just four years old.

Season after season, she's watched her boys play hard, hit the field, and hit that soccer ball with their heads.

"I do have a center defender who heads the ball a lot and that worries me," said O'Conner.

But she said it's a skill her older players have perfected so she agrees with the new rules just handed down from the United States Soccer Federation that ban players under the age of 10 years old from performing headers.

"We have to protect our heads, that is probably the scariest injury in soccer, is concussions," said O'Conner, who also said it's still a skill kids should learn if they're serious about the sport, "I think as soccer gets more competitive, 12 year olds need to learn how to head the ball, I mean kids are starting to get commitments to college by 16, so they need to learn how to do it by 12."

Fellow soccer mom Jayne Groover has a daughter playing soccer for CASL. She is also from England and her husband used to play soccer. She said she does think about concussions but worries the new rules will pull kids' focus from the game.

"I think what they do after is more important and just monitoring the kids, taking them out of the game instead of sending them straight back in," said Groover. "I'm more concerned about the kids colliding heads than heading the ball."

Link to study: An Evidence-Based Discussion of Heading the Ball and Concussions in High School Soccer