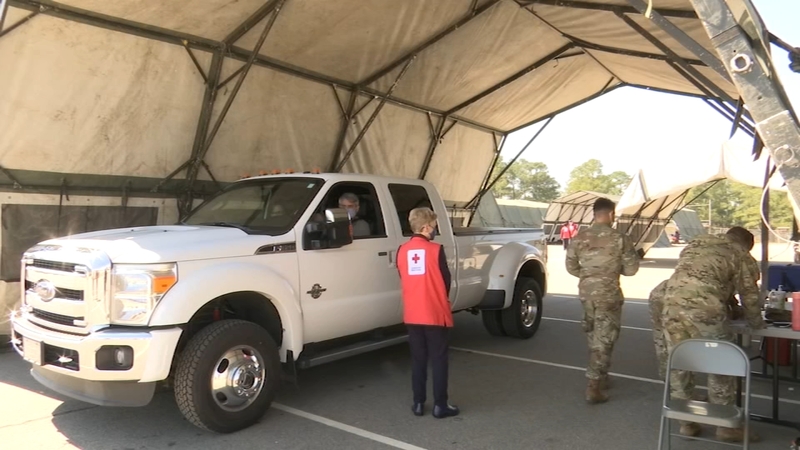 For the last few weeks, the military installation's fairgrounds have been home to a drive-thru clinic with the help of the 18th Airborne Corp, American Red Cross and Womack Army Medical Center staff, joining the site at Sports USA.

Lieutenant Colonel Nicholas Song, with the Fort Bragg Department of Public Health, says the post currently sits at around 40 percent when it comes to those who have chosen to opt-in to getting the series of Pfizer doses. "The goal, again, is to get to 70 percent immunity. Um, we want shots in arms, and we want to try to increase the number as rapidly as possible," Song said.

Navy veteran Scott Chapman stopped by for his scheduled appointment at the fairgrounds. "Need to get this done and over with," said Chapman. He's eager to get back to enjoying his hobbies without the fear of COVID-19 lingering over him.

Right now, health officials are currently accepting appointments for military members, family members, and other beneficiaries who are at high-risk and between the age of 16 to 64.

When asked about the vaccine hesitancy that Fort Bragg has been experiencing, LTC. Song says "the many concerns that they have are that, um, potentially that there are adverse side effects or that potentially it could affect their future health."

It's a concern that Army veteran Kathleen Candela says never crossed her mind. However, the mother of two says she's been encouraging others to get their shot, "just recommending to all of my fellow spouses to come here."

LTC. Song says they're working to educate military members and others about the safety of the Pfizer vaccines.