Vaccine mandates for companies will be messy but effective, experts predict 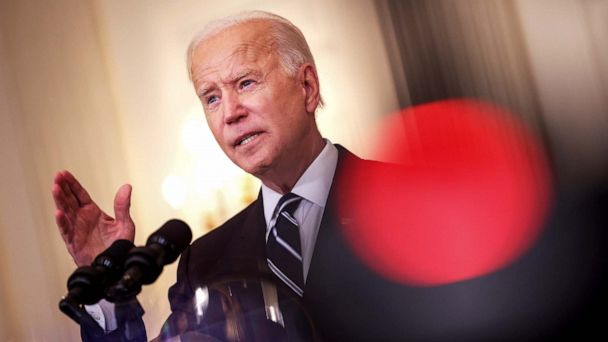 In the aftermath of President Joe Biden's latest announcement that companies with over 100 employees must mandate vaccines or test all employees once a week, legal experts say the Department of Labor rule will be litigious and messy, but it just might work.

"There's never been anything so extensive in American history that it requires vaccines across such a wide swath of Americans," said Lawrence Gostin, a law professor at Georgetown University and director of the O'Neill Institute for National and Global Health Law.


"But I think he's on rock-solid legal ground," Gostin said.

Already, Republican governors have outlined plans to overturn the rule -- which hasn't even been implemented by the Occupational Safety and Health Administration -- on behalf of their constituents who believe it infringes on their individual rights.

But experts who have reviewed the policy say Biden is acting within his power as president and backed by previous court decisions that have been pro-vaccine.

"I would argue that the basis for findings of grave danger and necessity, which is what statute requires, are probably stronger now for this use than they have been in OSHA's 50-plus year history," said Lindsay Wiley, a law professor at American University in Washington, D.C., and director of the school's Health Law and Policy Program.

Generally, when the emergency statute has been used in the past, often for chemical exposure in the workplace, it's also faced legal pushback. But it's never been used in a public health emergency, Wiley noted.

David Michaels, the longest-serving administrator in OSHA history and a professor at the George Washington University School of Public Health, said the agency's law is clear and straightforward: keep workers from getting infected at their jobs.

He was glad the Biden administration, which he advised during the transition, was finally utilizing it.

"The legal requirement is not to vaccinate someone or to say you have to be vaccinated -- it's, 'This is what you must do to make sure the workplace is safe,'" Michaels said.


He called for the Biden administration to take the rule even further, extending it to all businesses rather than just those over 100 employees, and include an indoor mask mandate.

The next question is whether or not the federal government, confined to the tools available in a country that rests much of its power with the states, has enough teeth to enforce the mandates.

As an underfunded and understaffed agency, following up with two-thirds of America's workforce to see if they're either mandating vaccines or testing workers at least once a week would take OSHA 150 years, said Debbie Berkowitz, a former senior official at OSHA under President Barack Obama.

Wiley agreed, noting that the agency has historically been "pretty spotty" at upholding measures.

"I don't know that OSHA has the resources to really go out and do a lot of inspections and really strongly enforce this provision," Wiley said. But in states that are supportive of Biden's rule, the state agencies could lend a hand, she said.

On the other hand, even with its checkered record, businesses generally comply with most other OSHA standards for fear of an investigation and a fine.

While OSHA is a small agency that "often can't inspect every time a worker complains," employers generally "know what they have to do" and will cooperate with the new rules when published, Berkowitz said.

And failing to comply with this particular rule could cost up to $14,000, the White House said Friday, which would be bad for business in more ways than one.

"There's the embarrassment," said Michaels. "If an employer is cited by OSHA, that's public information, and a lot of employers don't want to be seen as scofflaws."


Gostin, the Georgetown professor, predicted that Biden would order OSHA to prioritize enforcement of the vaccine mandate above other regulations.

"At the very least OSHA will send a notice of the standard to every large business in America and give them a deadline," he said.

The new mandates could also offer cover for businesses that wanted to enforce vaccine mandates or testing but didn't feel empowered to make the call without backing from a powerful entity, White House coronavirus response coordinator Jeff Zients said at a briefing with reporters Friday.

"The president's actions will accelerate that number of companies across the board for employers over a hundred," Zients predicted.

But the administration acknowledged that they don't have the legal authority to mandate vaccines nationwide.

"We don't have the ability to tell every American, 'You have to be vaccinated.' There's a means of encouraging it, of mandating it through certain pursuits or certain pathways, and that's exactly what we've done," White House press secretary Jen Psaki said Friday at a briefing.

Dr. Amesh Adalja, a senior scholar at the Johns Hopkins University Center for Health Security, said he thought companies would begin to implement mandates even before the rule takes effect because Biden's announcement, even without the regulatory action officially in place, would be enough.

"The biggest short-term thing that's going to happen is that many companies that were reticent to institute a vaccine mandate as a condition of employment are going to feel emboldened to do so now because they have the federal government kind of giving them a stamp of approval," Adalja said.