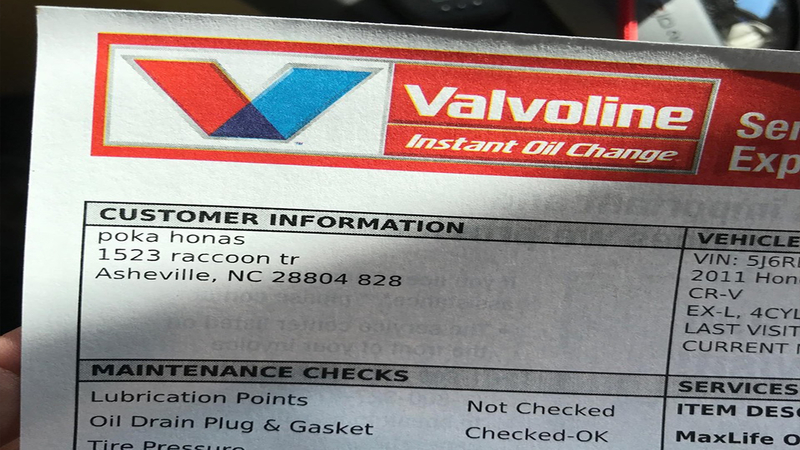 ASHEVILLE, N.C. -- A Valvoline auto repair shop employee in Asheville has been fired after reportedly calling a woman "poka honas" on her invoice.

According to WLOS, the Valvoline Instant Oil Change invoice was posted to Facebook on Monday by the woman's friend.

The customer said an employee wrote her name down as "poka honas," referring to Pocahontas--a Native American woman remembered in U.S. history due to her connection with the colonial settlement at Jamestown, Virginia. The term Pocahontas has also been used by President Donald Trump as a racial slur against Elizabeth Warren.

The customer's address was then listed as Raccoon Trail, which WLOS said is not a valid street name on Google Maps.

"This is a receipt from service at the Valvoline on Merrimon Ave. for a friend who happens to be a person of color," the Facebook post originally read. "THIS IS NOT OK. Maybe they thought they were being funny. Maybe they thought no one would notice. Whatever the motivation, the racist labeling of a person is never OK, whether at a business or otherwise."

The unidentified woman said the incident happened Sunday when she took her husband's car in to get an oil change.

After seeing the receipt she said she felt targeted.

"I felt like it was a racist microaggression directed at me," she said.

The CEO of Quality Automotive Services, A Valvoline Instant Oil Change Franchisee released the following statement:
"We are proud to be part of the Asheville community for the past seven years. Our company maintains four locations in the Asheville area and employs nearly 50 people to serve thousands of guests in the region each year. Our company and the Valvoline Instant Oil Change system as a whole do not tolerate discrimination of any kind. The core promise of our system, namely that of providing quick, easy and trusted service, is founded upon professionalism, respect and fair treatment. In demonstration of our commitment to that promise and the underlying values, our company has investigated the complaint and terminated the employee involved. The employee's actions in this case contradict our company's culture and the broader tone set by Valvoline Instant Oil Change. In addition, our leadership team has personally reached out to this guest to apologize for the invoice. We would like to reiterate that apology to the guest and expand it to their family and the community."

The company has apologized to the woman and offered her a full refund.

"It's not OK to label anybody based on gender, the color of their skin, an accent that they have," the woman said. "It's just really isolating for people when that happens."