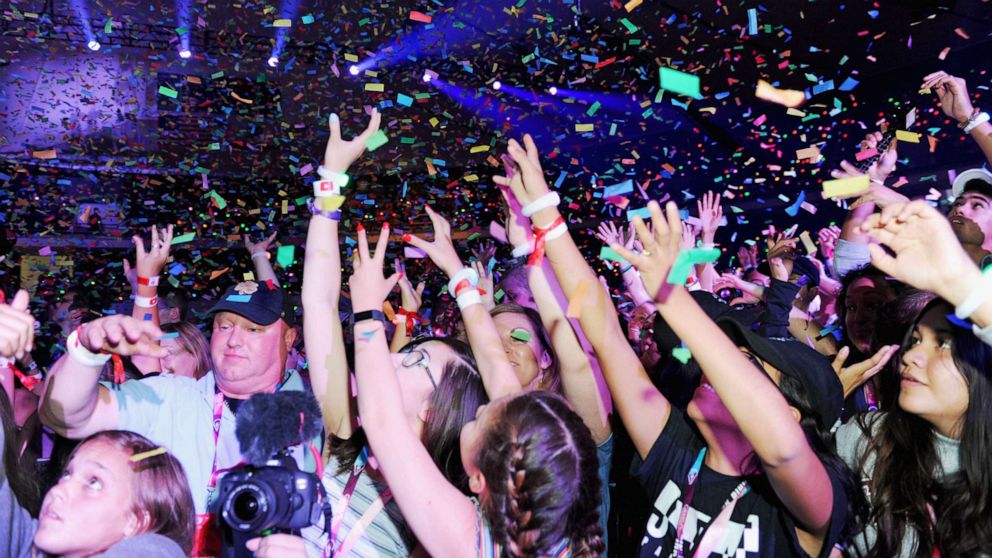 ANAHEIM, Calif. -- From YouTubers like MrBeast and GamingMermaid, to TikTok stars including Charli D'Amelio and Khaby Lame, online video creators of all stripes are flocking to Anaheim, California, from June 22 to June 25 for VidCon.

VidCon was launched in 2010 by Hank and John Green (known as the "Vlog Brothers" on YouTube). It's an in-person, four-day event where influencers can meet with fans, as well as network with potential business partners and corporate sponsors.

"It's kind of a mix of, I guess, cool concert where you can potentially see your favorite celebrities and also a place where a lot of business is done behind the scenes," says Chris Stokel-Walker, author of "YouTubers: How YouTube Shook Up TV and Created a New Generation of Stars."

Attendees can play games alongside creators, shop for merchandise, take in a concert from Rebecca Black or SZA, or watch panel discussions examining the best ways to monetize a video, how the YouTube algorithm works, and what the metaverse could mean for gaming.

It has also spawned other VidCon events around the world, including iterations in London, Madrid, Sao Paulo, and Abu Dhabi, United Arab Emirates.

"It's really a global event that kind of captures the idea of the international nature of online creation," says Stokel-Walker.

He adds that VidCon also can be a place to track the ups and downs of the often-tumultuous world of online video creators.

"Online fandom and success is incredibly fickle, and you can actually chart the success and failure of people based on pretty much where they stand in the VidCon lineup," he says. "You can see people who are maybe hugely popular one year finding that, five years down the line, they're ignored as they walk through the corridors."

VidCon has steadily grown in attendance over its decade-plus history, topping 75,000 attendees in 2019 -- up from just 1,400 at the first convention in 2010. Stokel-Walker notes that popularity is key to understanding just how much influence online creators can wield.

"It's very easy to think of these people with millions, tens of millions of fans as almost not real, and their fandom and their success almost isn't real," he says. "But when you see it in person, when you hear the clamor of the audience, as they see their favorite creators appearing on stage, you suddenly realize quite how powerful these platforms are."

The event marks the first VidCon in Anaheim in nearly three years, after organizers canceled events in 2020 and 2021 because of the coronavirus pandemic. And there's a major change this year: TikTok is the show's lead sponsor, taking over from YouTube.

"I think it shows the shifting sands of power amongst the two platforms," says Stokel-Walker. "What I find fascinating about it is that it, it kind of shows who's in the ascendancy. It shows what the marquee name literally is in this instance. And it turns out that nowadays it's TikTok."
Report a correction or typo
Related topics:
abc newsnational
Copyright © 2022 ABC News Internet Ventures.
TOP STORIES
Local law students react to swearing in of Ketanji Brown Jackson
Homeownership becoming more expensive in the Triangle
RDU gears up for busy July 4th holiday passengers
Governor Cooper signs bill that keeps hemp industry lawful
Raleigh woman named in long lost Emmett Till case warrant
Misdiagnosed 'miracle baby' improving thanks to last-minute treatment
Wake First Responders, Officers, Volunteers honored with CIT awards
Show More
FBI raids Fayetteville church accused of operating as a cult
Durham's East End Connector opens after construction delays
Cruise ship hits iceberg in Alaska, returns to Seattle for repairs
ABC11 to present Raleigh's July 4th fireworks show at Dix Park
Jackson sworn in as 1st Black woman to sit on Supreme Court
More TOP STORIES News