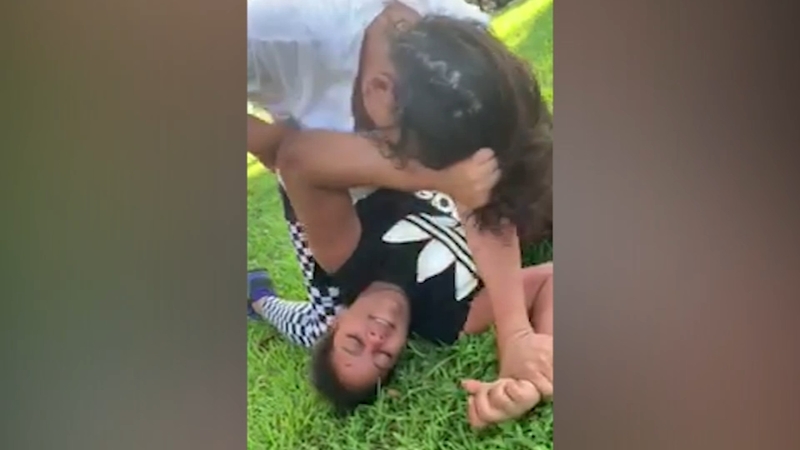 CLINTON, N.C. (WTVD) -- The family of a Clinton man that was killed during a street brawl on Sunday evening believe they were set up by the other parties involved.

Officers responded to the Dogwood Circle in response to shots fired around 6:27 p.m.

New video, exclusively given to ABC11, reveals the moments before gunshots rang out.

Carlos Rivera, 19, was killed. Malian Rivera, 41, was taken to the hospital with serious injuries, and Miguel Alamo was treated for non-life threatening injuries.

In the early police report, Clinton police said it appeared that Carlos began firing during the dispute.

Family members that spoke to ABC11 say that's not true.

Brenda Astor Marrero was one of the two women in the initial brawl. She said she and 25-year-old Kiera Torres agreed to fight outside of a neutral neighbor's yard.

"He didn't deserve for that to happen to him, because the problem was not with him, it was with me," Marrero said.

Marrero said Carlos was recording the fight. During the altercation, a woman in a black shirt, who they say is Anny Alvarado, walked past the two women on the floor and approached Carlos's pregnant sister.

Marrero and other family members say Alvarado and Carlos's sister had a long history of disliking each other.

When Carlos noticed the interaction, he dropped the phone and confronted Alvarado.

"Stopped her and dropped her on the floor. That's when she stood up and took her gun out," Maria Cintron said.

But Cintron's sister, Malian Rivera, jumped in front of the bullets. Carlos then pulled his unlicensed gun out and fired a shot.

The family says Carlos's gun fell out of his hand and Alamo and Alvarado continued firing at him as he ran away.

"So he shot to protect his sister and the mom. He gave his life for them," said Cintron.

In the initial police report, Alvarado and Alamo tell Clinton PD they were firing out of self-defense. The family believes the original fight was a set-up.

Figueroa says Malian is still recovering from her serious injuries.

Meanwhile, Clinton police have collected all video recordings and handguns at the scene.

We reached out for an update and no charges have been filed at this time.