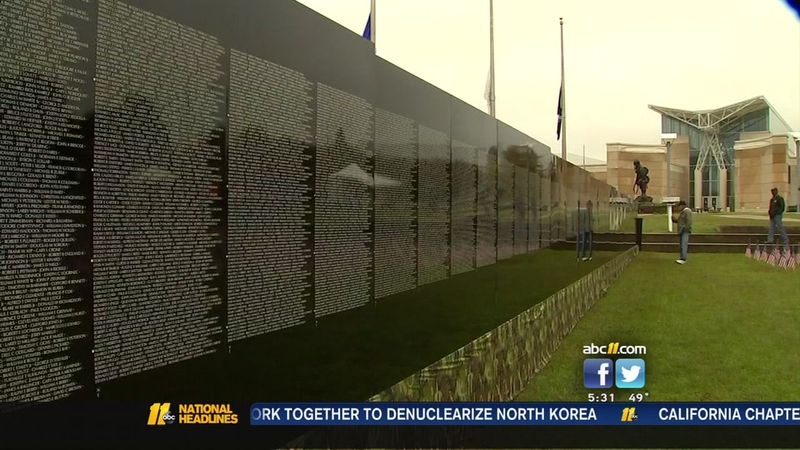 FAYETTEVILLE (WTVD) -- A half-size replica of the Vietnam Veterans Memorial Wallis now standing at the Airborne and Special Operation Museum in Fayetteville.

Names of the more than 58,000 service members who were killed in the Vietnam War are etched on the traveling wall. It also includes those missing in action and prisoners of war.

"We miss him terribly; I mean, our mom raised four of us kids," said Cindy Baucom-Hall, daughter of MIA Vietnam veteran.

Time has stood still for the Anspauch family. Cindy was just a little girl when her father Master Sergeant Robert Anspauch was deployed to Vietnam and never came back.

"It just means the world to mean to come down here, put his panel out, and really to be here," said Baucom-Hall. "Maybe he won't be alive when he returns home but at least he'll be on U.S. soil."

The moving wall is a traveling half-size replica of the Vietnam Veterans Memorial in Washington, D.C.

"Back in history, many of the veterans that returned were not afforded the opportunity to come back to a nation that welcomed them, so as part of the commemoration and Veterans Day, what better way than honor them with the moving wall?," said Mike Lynch, ASOM Director.

The moving wall is made of glossy, granite stone that offers a mirror-like reflection.

"When you're standing there you can see your reflection, so when you're looking at a name it's almost like you're a part of the wall," said SFC. Norman Zanders.

"If you're not able to go to D.C., at least you can come see this and know that we're still grieving," said Baucom-Hall.