Pilot's remains back on US soil from Vietnam after 52 years 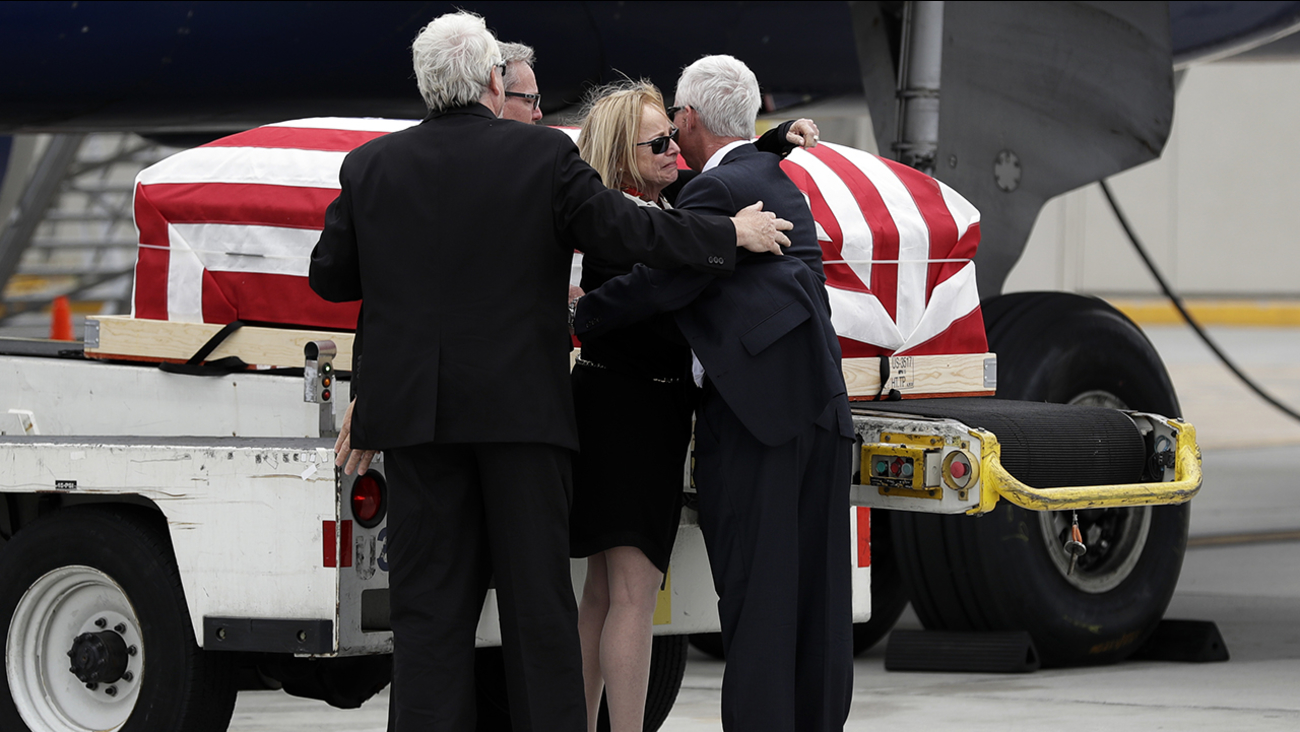 Deborah Crosby, center right, hugs her brother John Crosby, right, in front of her father's casket after its arrival to the airport Friday, May 26, 2017, in San Diego. (AP Photo/Gregory Bull)

SAN DIEGO, California -- Deborah Crosby touched her father's flag-draped casket as her three brothers hugged her in a tearful embrace on the tarmac at the San Diego airport Friday - ending a more than half century search to find and bring home the remains of Lt. Cmdr. Frederick P. Crosby, shot down as a Navy pilot in the Vietnam War.

Deborah Crosby, now 58, was only six when she was sent home from the first grade to learn her father was presumed dead, though his body had not been found.

Her mother could never talk about that day, but she gave Crosby and her brothers a binder with articles about her father's plane zooming low through the clouds on a bomb damage assessment mission before it was gunned down by North Vietnamese ground forces in 1965. The 31-year-old pilot was armed only with cameras, his daughter said.

Crosby and her grandmother made a pact to someday bring home her father's remains and bury him in his hometown of San Diego.

A year ago, military investigators found his remains in a fish pond in north Vietnam. On Friday, Deborah Crosby fulfilled her promise to her late grandmother.

Passengers watched through the windows of a Delta Air Lines jet as the flag-draped casket was removed from the hold by six sailors.

"I'm just overwhelmed with seeing the plane drive up and all of the uniforms and all of the respect and the honors that he's receiving," Deborah Crosby said.

The sailors saluted before the casket left in a hearse.

On Sunday, Frederick Crosby will be buried at Fort Rosecrans National Cemetery with full military honors and a Navy flyover.

Deborah Crosby never doubted the fact that her father was killed. But her grief seemed to linger in a deep space inside her until she received news that his remains had been recovered, finally giving her closure.

"It just changed my life in so many ways," the energy consultant who lives in New York said earlier in an interview. "It relieved a lot of sadness that I've been carrying around in my heart very quietly."

The U.S. military actively searches for missing service members from conflicts worldwide. According to the National League of Families of American Prisoners and Missing in Southeast Asia, 969 missing service members have been accounted for since the end of the Vietnam War in 1975, while the whereabouts of 1,611 remain a mystery.

Deborah Crosby called to inquire regularly about the military's progress on her father's case.

Decades passed and her mother and grandmother both died before investigators got a breakthrough on their third trip to the area when they met Pham Van Truong, a lifelong resident of Nam Ngan ward in Thanh Hoa City.

According to a 50-page report given to Deborah Crosby, the 89-year-old man told investigators he couldn't recall the month or year, but he remembered during the war that he was cooking limestone to reinforce his house when he heard gunfire and ran to the nearby levee to investigate. He saw two planes headed toward his house, and one was on fire as it glided toward the levee. He said he could see its wing and tail surfaces were missing. The aircraft rolled as it hit the fish pond in front of his house, splashing Van Truong with water and mud. The other aircraft kept flying toward the sea.

Based on the new information, U.S. military investigators decided to comb the bottom of the pond in 2015. When they emptied it bucket by bucket, they found bones, pieces of fabric from the pilot's uniform, his chrome lighter and wedding band.

Deborah Crosby felt she could finally shed the tears stored up inside of her.

"It's nice to be able to let out the tears and to have some relief in our hearts," Crosby said. "And now we're able to talk about it. Before we didn't talk much about this and now we can talk proudly and we have you know a happier ending and we can visit my dad's gravesite."

Crosby said her brothers want to keep the fabric, lighter and wedding band.

She said she wants the flag draped over his coffin to be able to "hold it close to my heart."