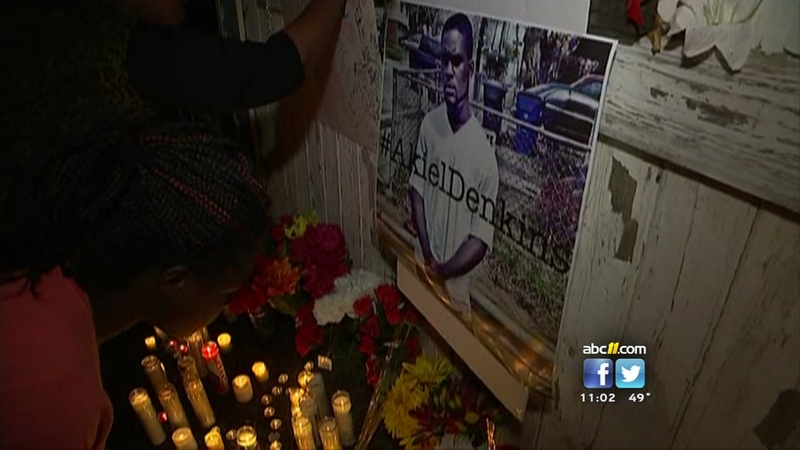 RALEIGH (WTVD) -- Outrage and anger was palpable in southeast Raleigh on Monday night, at a rally and vigil in a section of the city that has long felt ignored and marginalized.

The deadly police shooting Monday afternoon was the tipping point for many who live here.

The memorial for Akiel Denkin, the man killed in a police involved shooting on Bragg Street Monday. #abc11 pic.twitter.com/UoVzgWlLWA

The rally was scheduled to begin at 7 p.m., but protesters were too angry to wait.

From 6:30 p.m. until 8 p.m., there was an outpouring of outrage over the death of the man now memorialized on protest signs, 24-year-old Akiel Denkins.

A Chopper 11 HD image shows the crowd marching at a vigil for Akiel Denkins, who was fatally shot by Raleigh police earlier Monday.

"Black lives matter!" echoed down Bragg Street. There were young and old, blacks and whites. And many of them wondered aloud, why Raleigh elected officials were not there, why the city's police chief didn't attend. This crowd of a few hundred demanded accountability for what many of them saw as a case of deadly police force against an unarmed man running away from officers.

"We need to understand that when you take the life of a young man or a young girl you may be killing the next president," said bishop Howard Winston of Raleigh's Trinity United Faith Center Church.

Aware they could be presiding over a tinderbox of emotion, community leaders tried to urge calm.

"We are gonna march, but we need to know what we're marching for," said minister Diana Powell responding to loud calls from the crowd to amp up the protests.

"We have to fight them on their levels and it don't involve burning up the buildings, burning down Crabtree Mall, that don't solve nothing," said an unidentified protest leader.

After the rally, protesters descended onto Bragg Street in a four-block march to Bible Way Temple on Holmes Street. Representatives from the Nation of Islam provided security and crowd control for the impromptu march which seemed to allow the young demonstrators to blow off steam after all the emotions of the day.

Organizers called on demonstrators to show up en masse to Raleigh's April 5 City Council meeting. In response to the shooting, they will demand the city equip police officers with body cameras and they want the creation of a civilian review board to help mediate issues with the department.