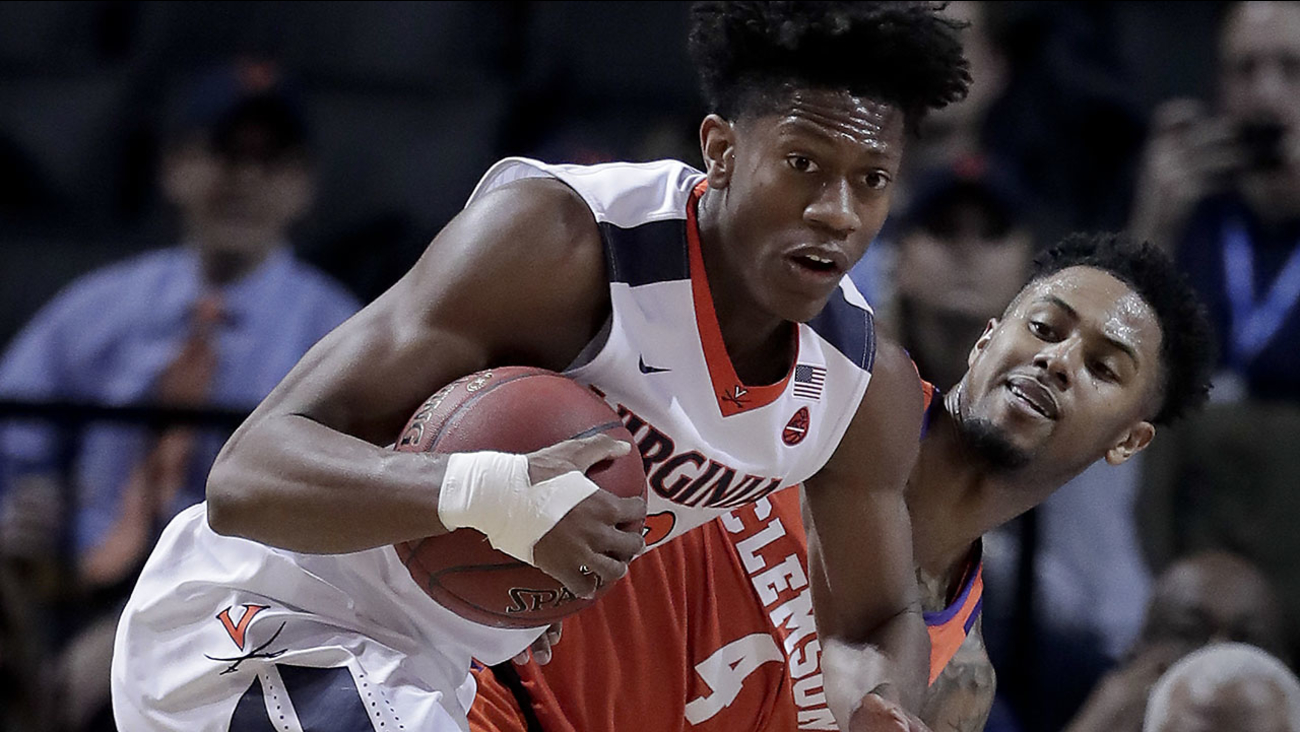 The Cavaliers (30-2) will play for the league title for the third time in five years. Tony Bennett's squad won the title with a win over Duke in 2014, and fell to North Carolina in 2016.

"This is a complete group. Their unity is as good as any as I've ever coached," Cavaliers coach Tony Bennett said. "They're relentless the way they play, and that's the way we have to play to be good."

Virginia will get a chance at some payback for two years ago - as North Carolina upset Duke 74-69 in the nightcap.

Virginia's only other ACC crown was in 1976.

Clemson (23-9) waits to see where it will be seeded in the NCAA tournament.

The Cavaliers got several crucial plays from role player Jack Salt down the stretch.

Shelton Mitchell had 18 points and Elijah Thomas added 15 for the fourth-seeded Tigers, who remain the lone original member of the ACC that hasn't won the conference tournament. Clemson was trying to reach the finals for only the third time.

"They're just so big, long, athletic, and there's a lot of them, so they keep rotating guys," Clemson coach Brad Brownell said. "They don't ever back off. They play like this every day."

Tigers leading scorer Marcquise Reed, who was averaging better than 16 points, was held to six on 2-for-14 shooting by the nation's most suffocating defense. He missed nine of 10 tries from 3-point range.

Virginia built a 14-point lead with 13 minutes remaining and slowed the game down, but Clemson cut the deficit to five with 7:22 left. That's when Salt, a 6-foot-10 junior center from New Zealand who was averaging 3.4 points and 4.1 rebounds, started coming up really big.

After tossing in a baby hook with 8:25 to go, he grabbed an offensive rebound, scored on a turnaround bank shot in the post and followed with another bucket inside at the five-minute mark to make it a nine-point game.

"He's just all heart, and he'll do whatever you ask," Bennett said. "But I think we have a team full of guys like that."

For good measure, he pulled down an important defensive rebound, had a tip-in with 2:02 left to make it 59-51 and then saved a long pass from going out of bounds.

Salt scored all eight of his points and snatched six of his eight rebounds after halftime.

"They were probably just surprised I was scoring so much," Salt said. "It was a bit ugly at the end, but it was good to get it."

Clemson got within four with 13.4 seconds left, but Devon Hall hit two free throws and Reed missed two shots at the other end as Virginia closed it out.

Clemson executed nicely on offense for the first 10 1/2 minutes and jumped out to a 20-13 lead as Virginia missed eight of its first nine 3-point tries.

But as if they simply flipped a switch - and turned the lights out on Clemson - the Cavaliers clamped down and held the Tigers to 0-for-10 shooting the rest of the first half. UVA fans roared their appreciation of the defensive effort, and at the other end Guy scored eight points as Virginia hit seven of eight shots in a 16-0 spurt.

Three free throws by Mitchell with 1:07 remaining snapped Clemson's scoring drought, and the Cavs went into halftime with a 32-23 advantage.

"I thought the guys really buckled down," Bennett said. "This was a blue-collar game where you're just going to have to fight for everything."

IN THE COMPANY OF A LEGEND

Bennett was chosen the USBWA Henry Iba National Coach of the Year for the third time. The only coach with more was UCLA great John Wooden (six).

Clemson: Picked in the preseason to finish 13th in the ACC, the Tigers set a program record with 11 regular-season wins in ACC play.

Virginia: Reached 30 wins for the fourth time in school history and improved to 7-1 against Clemson in the ACC Tournament, though this was their first meeting since 2004.

Clemson: Headed to the NCAA Tournament for the first time since 2011, the team's first season under coach Brad Brownell.