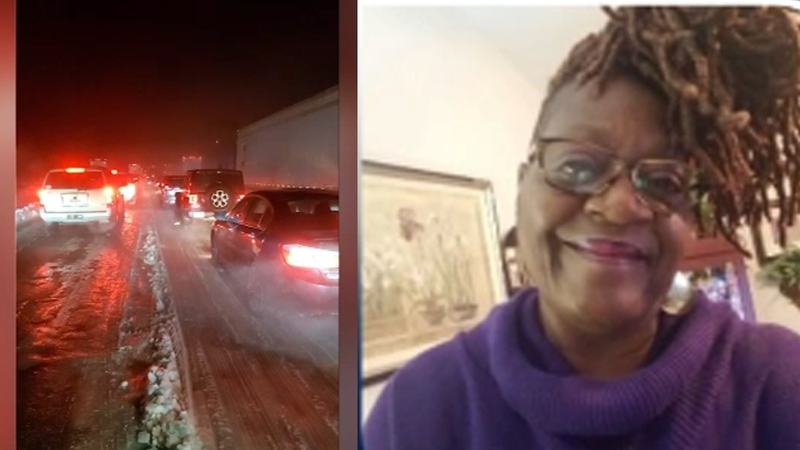 Wendell woman stuck in I-95 traffic nightmare in Virginia

WOODFORD, Virginia (WTVD) -- An icy traffic nightmare in Virginia has snarled traffic for more than 15 hours and at least one of the motorist caught up in it is from the Triangle.

Shirley Maney lives in Wendell, and she's been stuck on I-95 since Monday morning.

Maney said she left Raleigh around 10 a.m. heading for Pennsylvania to visit with her son. As she entered Virginia the snow started coming down quickly.

By the time she got to Richmond traffic was a complete nightmare, but she said she was too far to turn around and return home.

"We've been sitting in this one spot since--I don't know, five or six hours, not moving at all," Maney said.

"We've been sitting in this once spot since--I don't know, five or six hours, not moving at all," a woman from Wendell said.

Maney said she called police and they explained that crews are working to clear the road but it's unclear how much longer it will take.

She's about an hour from her destination--that is an hour with normal traffic. She just hopes she can get moving soon so she doesn't run out of gas.

The massive traffic backup happened because of a tractor-trailer crash Monday afternoon. No serious injuries were reported in the crash, but it has closed both directions of I-95 for hours.

Hours passed with hundreds of motorists posting increasingly desperate messages on social media about running out of fuel, food and water.

Video shows the icy traffic nightmare unfoldiing on I-95 between Washington, DC and Richmond, Virginia.

"Crews will start taking people off at any available interchange to get them - for the southbound queue 143 (Garrisonville) and 140 (Courthouse) and northbound at exit 104 and exit 110. NB is 104 (Carmel Church) and 110 is Ladysmith," VDOT tweeted at 5:20 a.m. Tuesday.
The agency said Monday that emergency crews were responding to more than 600 accidents in the winter weather. Compounding the problem, traffic cameras went offline as much of central Virginia lost power in the storm, the agency said. More than 281,000 customers remained without electricity on Tuesday.
Report a correction or typo
Related topics:
trafficvirginiaicesnowweathertraffictraffic delay
Copyright © 2022 WTVD-TV. All Rights Reserved.
TOP STORIES
Snow likely to start around midnight, last until sunrise
Essentials to keep in your car during winter storms
LATEST: Breakthrough cases make up 37% of new COVID infections
Former NCSU footballer Torry Holt named to NC Sports Hall of Fame
Epic Fun Park to open this summer in Fayetteville
'Tiger King' Joe Exotic set for resentencing in Oklahoma
Durham police issue warrants for suspects in hit and run crash
Show More
Two high school seniors receive surprise early graduation
Minnie Mouse ditches iconic red dress for pantsuit
Biden confirms he will nominate first Black woman to SCOTUS
'It's difficult': Clayton ICU nurse remains hopeful despite challenges
Change being made to Holocaust curriculum in NC public schools
More TOP STORIES News