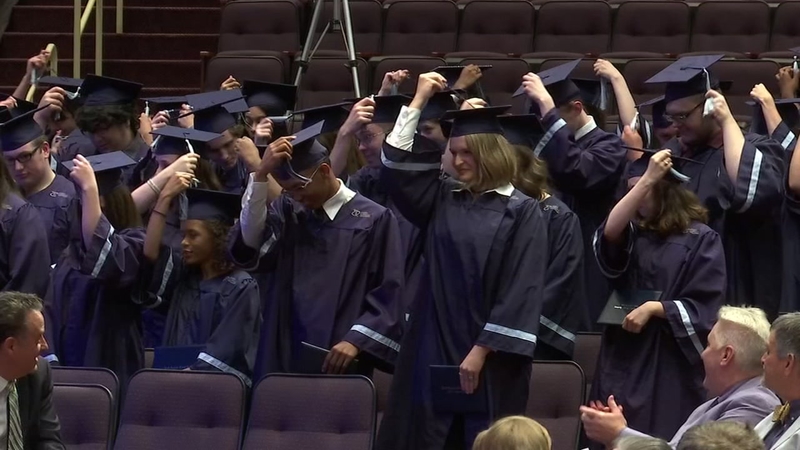 Wednesday's graduation ceremony for the North Carolina Virtual Academy featured many staples you'd find at any school: diplomas, a walk across the stage, the ceremonial moving of the tassels. But this featured one key difference: it was the first time many of the graduates and teachers had met in person.

"It was exciting seeing like -- oh, what's your name? And then like the light bulb goes off, and you see how they talk transfers to when they're typing and speaking into the microphone. And it's a lot of fun," said Wyatt Payne, this year's class salutatorian.

Payne attended a brick-and-mortar school through 10th grade, but found the high school environment to be too distracting, and grew concerned about his dropping grades. That's when he made the decision to transfer to an online school.

"I've actually been more active and have done more exercise since I've had the online experience. Because at the end of the day I wasn't exhausted, I wasn't worn out from dealing with other people," Payne explained.

He was awarded a scholarship from NCVA's Board on Wednesday, and has plans to attend Elon University. During his senior year, he dual-enrolled at Wake Tech.

"It's just really great to see all my work has paid off," said Payne, who had met a few of his classmates on a school field trip.

North Carolina Virtual Academy began in 2015, and is an online public charter school authorized by the state's Department of Public Instruction. This was the school's second senior class, but the first to include students which spent their entire high school with NCVA.

"It means success. It means that we were effective in our jobs, it means there's a place for students who need an alternative," said Amanda O'Brien, a high school history teacher with NCVA.

"The demands are not necessarily a 40-hour a week job in brick-and-mortar, it's more like a 60-hour a week job. And it doesn't give a good work-life balance," O'Brien said.