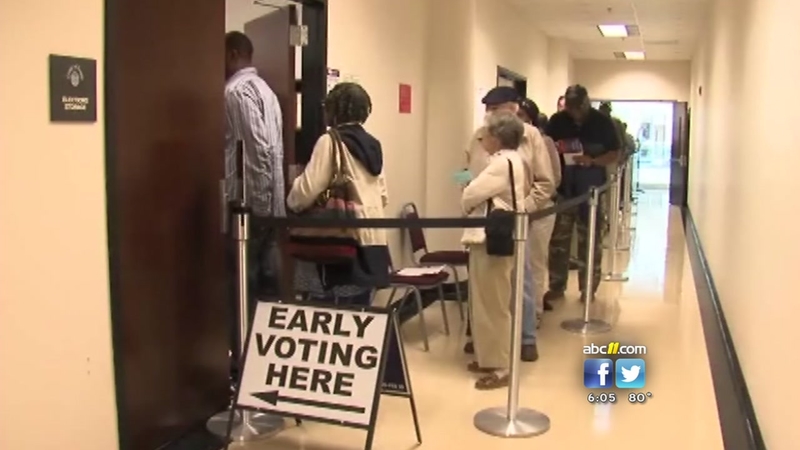 RALEIGH (WTVD) -- With the Supreme Court's refusal to hear an Appeals Court case that overturned North Carolina's 2013 elections law, the struggle for voter rights has moved to the counties.

The court decision resets the state's voting laws to before the 2013 law was passed. That includes 17 days of early voting but it raises a number of other questions; the number of hours and location of early voting sites aren't spelled out, for example.

At the reported urging of the state Republican party, many county boards of elections - which are all led by Republicans - have submitted plans for early voting that mirror provisions of the 2013 law or trend in that direction.

"Lenoir County's plan represents a 76 percent reduction in early voting hours compared to 2012," said Riggs. "Early voting sites and predominantly African-American communities have been tossed. Weekend voting and Sunday voting have been tossed. Evening hours, tossed. It just flies in the face of what the 4th Circuit's ruling stood for, which is, you have a problem with discrimination when you try and attack voting like that. One of the reasons they wanted to get rid of Sunday voting is because black voters disproportionately used it and black people tend to vote Democratic."

The author of the 2013 law, Rep. David Lewis (R-Harnett Co.) bristles when he hears that.

"I guarantee you," Lewis said, "under our plan, more people would have been able to vote."

Lewis says now that NC elections have gone back to pre-2013 rules, "all bets are off." The 2013 cut the number of days of early voting from 17 down to 10 but required county boards of elections to set the same number of hours of early voting realized in 2012. That required more polling sites that would be open for longer hours. Without the law in place, there are no rules regulating number of hours or number of polling sites.
Cumberland County was one of two that failed to submit a majority plan to the state board of elections. The minority Democratic member turned one in but the Republicans didn't, and if the state board allows that to stand, the county would only have one polling place open (headquarters in Fayetteville), during business hours and only on weekdays for all 17 days of early voting.

Wake County's plan limits early voting in the first 7 days to the elections HQ in Raleigh and opens more sites after that. Riggs said it's a question of access.

"What we see in Guilford and Wake County that's a problem is where the county board office and how accessible it is."

Riggs said in many counties, including Wake, it's not a question of money, and Wake County Commissioners tell us they have money to open more early polling sites.

"We have examples of counties where the commissioners said, 'Open as many early voting sites as you can and they will be fully funded.' We have lots of examples of these. And counties are still not doing that."