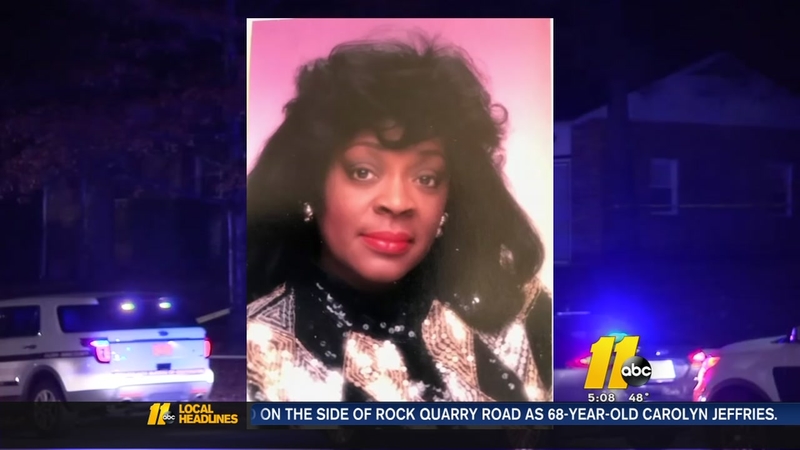 RALEIGH, North Carolina (WTVD) -- The death of a 68-year-old woman on Rock Quarry Road has a link to last week's fatal shooting near the Waffle House on Capital Boulevard. A family feud may be the common thread.

Carolyn Hall Jeffries was found Wednesday in her home in the 2400 block of Rock Quarry Road in Raleigh. Her brother found her unresponsive as he went to the home Wednesday to check on her. Family members told ABC11 they had not heard from Jeffries in several days.

"We decided to come over today (to the Rock Quarry home) to figure out what was going on with her," said Jeffries' brother in a 911 call. When asked to clarify whether Jeffries was simply unresponsive or in fact dead, he told the dispatcher, "I'm saying that when I went back into the house, I'm calling her name and she didn't respond. And when I went back into the bedroom, she was covered up and a blanket was covering her head. And when I called her name, she still did not respond."

A Raleigh woman found dead in this home on Wednesday may be linked to last week’s fatal shooting near Waffle House. I’ll tell you how today on Eyewitness News. #ABC11 pic.twitter.com/SoVN18ROcI

The link between Jeffries and last week's deadly shooting near the Waffle House on Capital Boulevard is the home on Rock Quarry Road where she was found dead.

Emma's late father, Willie McCullers Jr., owned the Rock Quarry home up until his death in April. McCullers did not have a will when he died and the home was transferred to his estranged wife, Carolyn Jeffries.

Family members were in the midst of a legal dispute over ownership of the home.

According to family members, many were upset that Jeffries received the home as she and McCullers were separated.

In addition, Wright lived in the home and moved out a month ago. Shortly after Wright moved out, Jeffries moved in.

In the 911 call, Jeffries' brother told the dispatcher he saw shotgun shells in the backyard as well as one in the doorway. He also said the back door to the home was not locked when he arrived.

Jason Griffith killed himself a mile away from the Rock Quarry home at the Carolina Biblical Gardens Cemetery on Creech Road.