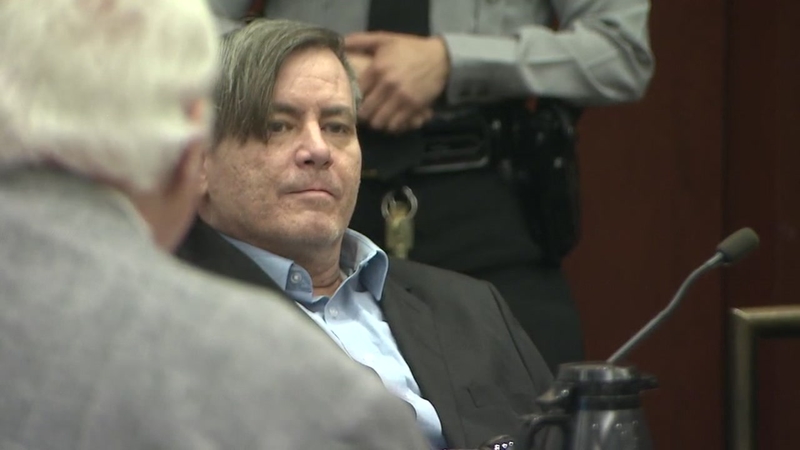 Triple murder defendant scoffs at 911 call but no outburst

But he did narrow his eyes, look at his attorney and the subtly shake his head during a 911 call played during the testimony of one of his neighbors.

In the call made by that neighbor right after the March 25, 2016 shooting at Clear Springs subdivision near Wake Forest, you can hear Sal Mazzella yelling.

His wife, Elaine, son Sandy, and daughter-in-law Stephanie had been gunned down just minutes earlier by Jon Sander, their next-door neighbor, according to investigators.

Sander's wife and children were evacuating their home and Sander was holed up inside surrounded by officers.

"You killed my wife, and my daughter-in-law, and my son," Mazzella wailed in the 911 call.

Sander also smirked during the call apparently questioning the sincerity of Mazzella's emotions.

Sander's attorney told jurors at the start that he would testify that while he was in the Mazzella's home he didn't fire a gun or murder anyone.

And yesterday, when Mazzella was testifying, Sander stood up and started screaming.

His last words as deputies hauled him from the courtroom were, "You killed your family and you're going down for it!"

That made it appear he may blame the murders on Sal Mazzella.

But witness after witness today not only put Sander at the scene of the crime but one neighbor said she saw him with a gun.

Kristen Myer told jurors she could see Sander and Sander's wife Lori from her back window as she was on the phone with 911 after hearing gunshots.

"Seeing Mr. Sanders walk through his backyard holding a shotgun and we could see through - it looked like Lori did not want to let him in. Very briefly, she had called her kids, 'Come inside. Come inside,'" Myer said.

And the first officer on the scene who tried to coax Sander out said it was a while before he even responded.

Another deputy testified that as Sander's family exited the home while he was holed up inside, she had a tense encounter with his daughter.

"She was very agitated and she turned and screamed at me and she said, 'My father did it. They deserved it. He threatened to kill us and my cat and my dog," Deputy Jessica Rattelade testified.

S.D. Stell told jurors, "Once I started approaching the house she was in the front crying and screaming and saying, 'Mommy and daddy were shot.'"

Stell said later when he was in the Sander home he saw a shotgun and handgun lying on a bed.

And in another 911 call played in court today you can hear Sal Mazzella tell a dispatcher that Sander had a shotgun in one hand and a gun in the other.

The two families had been friends in Pennsylvania before moving to Wake County.

Here they were business partners, close friends, and next-door neighbors, but their business and personal relationships began to sour in late 2015.

And in the weeks before the murders, a juvenile member of the Mazzella family accused Sander of molesting her.

Sander's attorney told jurors at the start of the trial that he was very upset by that allegation.

Stephanie Mazzella's brother said he and his sister were in her backyard when the gunfire began and he could hear Sander yelling about the allegation.

"I heard him say, 'You call me a molester.' And shot two more times. He said that like three or four times, and my sister started running and I grabbed her. She pulled out of my arms."

He said she ran into the back porch where she was later found dead after being hit by two blasts from a shotgun.

Her husband was lying nearby, killed by three shotgun wounds, and her mother-in-law was shot twice in the kitchen.

Testimony will resume tomorrow morning with a Wake Forest police officer on the stand.

He was the second officer to arrive at the scene and was wearing a body cam.