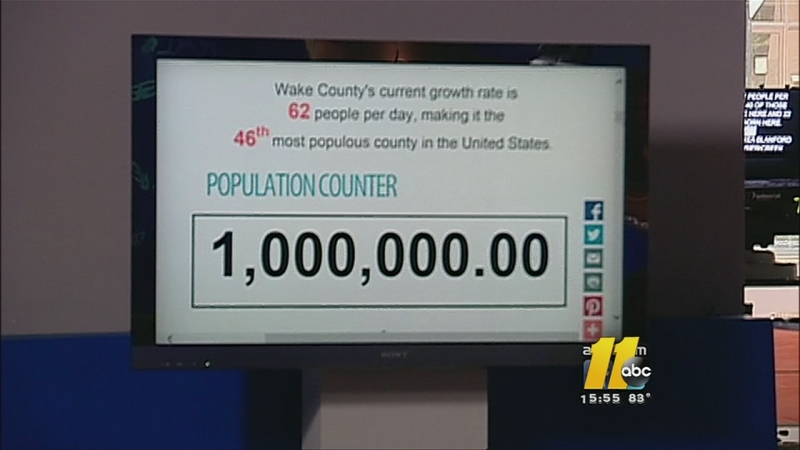 RALEIGH (WTVD) -- A major milestone for Wake County Friday as the population grew to reach one million residents. Wake County now ranks as the 46th most populous county in the United States.

Not even a day old, Julian Spencer, has a birth date for the record books.

"He was born at 12:12," exclaimed his mother Galina Spencer inside their room at Rex Hospital in Raleigh.

Galina and her husband Chesley helped Wake County reach one million residents by noon on Friday.

"Yesterday, before we went to the hospital, we saw the news about it," explained Galina. "Just thought oh, OK that's cool the millionth person is coming to the area."

Wake County officials said each tick of their population counter represented a formula calculating natural growth, the number of babies being born, plus net migration; every day 40 people move to Wake County.

"We're just excited to be part of all the changes here in Wake County!" said Patti Galloway.

She and her family of three are moving to Raleigh's Brier Creek neighborhood after living in Charlotte for the last three years.

"I can't believe all the new restaurants, revitalization and all the new neighborhoods," she said. "But I just love- it feels like family."

While he may not have been the one millionth resident, Julian's parents say in their eyes he's one in a million.

"We have an interesting story for him to tell how it was just around his birth- all of this happening!" said Galina.

Wake County officials say if the county averages 25,000 new residents a year, Wake could grow to a population of 2 million by the year 2054.