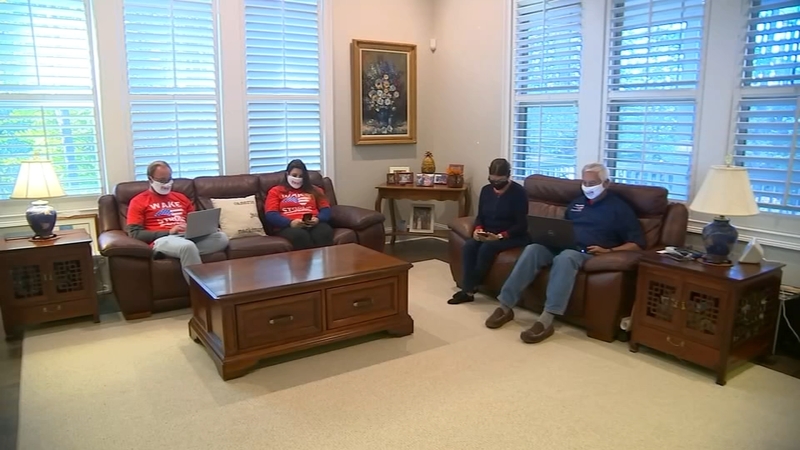 WAKE COUNTY, N.C. (WTVD) -- Brian Roth and his team of Democratic volunteers were pounding the pavement in northwest Raleigh on the eve of Election Day. But they aren't from Wake County. Roth flew here from Seattle, Washington -- fed up with President Trump and inspired to help turn North Carolina by talking to as many voters as they can.

"We decided we're tired of saying we should do something and we actually decided to do something," Roth said. "We decided that since Washington is all mail-in-ballot state, that we'd send our ballots in early and fly to North Carolina and help get out the vote here."

Wake Democratic Party Chair Rebecca Llewellyn said volunteers have come to the county from all over to push this battleground into Joe Biden's win column -- Not just from Washington State; she says from Texas too, even a volunteer who paid their own way here from London.

Hours before the polls open across North Carolina, volunteers in Wake County spent the final moments of #Election2020 scrambling for every last vote. #abc11 pic.twitter.com/GT5k0FjNr1

In this north Raleigh living room tonight, it might be the closest thing you see to a campaign war room during a pandemic, masked volunteers from Republican Alan Swain's Congressional District 2 race were scouring Wake County voter rolls looking for anyone who hasn't voted yet.

"What we're doing today is we've been out texting (voters) to try and get out the vote. Just push the numbers out so more people can do it," Swain said.

"Everyone on both sides is as working hard as they can for every last vote. We can't leave it on the table," Hellwig said.

He's even convinced his young twin sons to spend their off-hours on a half-day from school sending peer to peer text messages to voters still on the fence. Hellwig using allowance money and chicken nuggets to keep his young volunteers on task.

"If it's a (voter) we know is gonna vote our way, we gotta make sure they remember to vote. Most people know about it. But there's a hesitant few that you have to drag over the finish line," he said.
Report a correction or typo
Related topics:
politicsraleighwake countyvotingvote 2020joe biden2020 presidential electionwake county newspresident donald trump
Copyright © 2022 WTVD-TV. All Rights Reserved.
2020 PRESIDENTIAL ELECTION
Ted Cruz apologizes for describing Jan. 6 attack as terrorism
Washington marks a year since violent Jan. 6 insurrection
By the numbers: How the Jan. 6 investigation shapes up 1 year later
Who placed the pipe bombs the night before the Capitol attack?
TOP STORIES
LIVE COVERAGE: Winter storm arrives in NC
Why do we get freezing rain instead of snow or sleet?
Hostages in N. Texas synagogue 'out alive and safe,' Gov. Abbott says
School Closings
Find out which schools are closed in your district.
Gov. Roy Cooper warns all to prepare now for winter weather
Man shot, killed by officer at Duke University Hospital
AMBER Alert canceled for missing Durham 9-year-old boy
Show More
Tsunami advisory issued for US after volcano explosion
Netflix raises subscription prices again
N95 vs. KN95 masks: What's the difference between them?
Lee County deputy shot, expected to recover
Questions arise at vigil for man killed on I-440 by Raleigh police
More TOP STORIES News