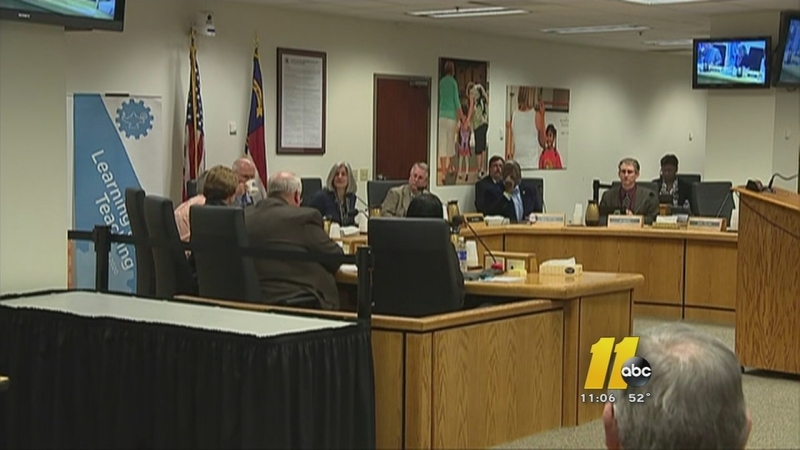 The Wake County Board of Education Tuesday night approved a 2016-17 enrollment plan that will move some students to new schools to reduce overcrowding.

District officials said fewer than 3,300 students will be affected and more than half of those will be eligible to "grandfather in" to stay at their current school.

The majority of students affected by the plan will have their base attendance area changed to one of five new schools opening in 2016: Beaverdam Elementary, Pleasant Grove Elementary, Pine Hollow Middle School, Oakview Elementary and White Oak Elementary.

The district has held multiple meetings with parents upset that their children were being reassigned in recent weeks.

As a board member, I think about these families that I hear from. These are difficult decisions and we struggle with them at the end of the day," said board member Christine Kushner. "We have to look at our entire system and capacity issues and make these hard decisions."

Also at Tuesday night's school board meeting, board member Tom Benton was voted in as the new board chair, leaving Christine Kushner to step down.

Kushner was presented an award by the now chair Benton, as well as Supt. James Merrill, for her two years of service as board chair.

Kushner told the room that it's been an honor to lead the board and that she feels they've accomplished a great deal.

"We've increasingly improved collaboration the last two years I think with our local leaders, beginning with an inter-local agreement with county commissioners regarding facilities and construction starting in 2014," reflected Kushner. "And this year our collaborative work with our county commission resulted in the largest single increase in our local budget appropriation in the history of the school district. I'm very proud of that milestone."

"I look forward to continuing my service on this board with my colleagues and as a Wake County school board member, thank you," said Kushner before applause filled the room.

Tom Benton has now taken over the title and said he is "proud and tickled to death to be in this role" and is already looking ahead.

He said he wants to continue collaborating with Wake County commissioners, reach out to lawmakers about teacher and staff salaries, and take a closer look at standardized testing.

"I think this is going to be a major issue over the next couple of years. Students, parents, teachers, will all tell you that the present level of testing we're doing is not good for learning, for students."

He also said he wants to streamline the process of adopting student assignment plans.

"Not to take six months of our time of looking at just student assignment because there are so many other issues," he explained.

The board also voted in favor of a adopting a resolution to support the current school board districts and method of election.

In 2013, the North Carolina General Assembly passed a bill that makes a number of changes to the method of electing, among many things, the Wake County school board.

"The General Assembly decided to take matters into their own hands in the 2013 legislative session and pass a law that changes how we get elected. I don't think it's going to be in the best interest of the community," said board member Susan Evans.

Under the new method, elections are no longer staggered. That means next year, all nine seats will be up for reelection.

"It would have been particularly difficult to come onto a board and not have any board members who already have institutional knowledge to help you along the way, so that's problematic," said Evans.

While the board voted to adopt a resolution to keep everything as is, there is a lawsuit underway against the new bill.

The suit was brought against the state by the Southern Coalition for Justice. They head to court on December 16.