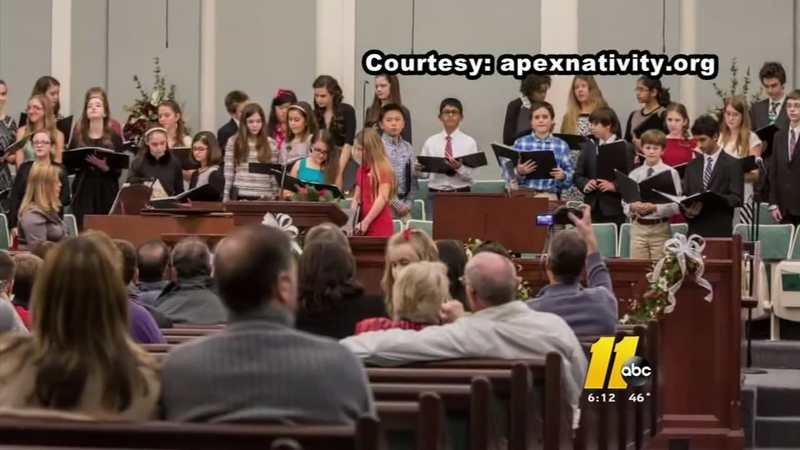 The district pulled out of the event without warning after receiving a letter from Madison, Wisconsin. The Freedom From Religion Foundation complained about student participation. WCPSS attorneys sided with the FFRF.

"What we found inappropriate was that local Mormon church leaders were providing religious testimony to our students and their parents," said WCPSS spokesperson Heather Lawing.

The district said it believes Mormon leaders at the Church of Latter-day Saints in Apex, which hosts the Nativity Celebration, were trying to convert attendees and point to a statement made in a promotional video.

Church President Steve Bodhaine says, "This for us is the opportunity to share the wonder and the love of the savior."

Choirs from four Wake school were set to take the stage last week during the event.

Apex resident Peggy Smith's daughter used to sing at these events. She says the district bowed down to a special interest and the student suffered.

"It is a huge amount of work," said Smith. "They (students) are not endorsing religion. They're singing at a religious event and this is a Christian country. We were founded on Christian principles. I think it's ridiculous."

"There's no proselytizing, there's not even a hint of it," she said. "There are no images of Christ where the students perform."

Vanhille explains she would have made adjustments to the program had the district only come to her.

"We could have reached a conclusion in advance rather than cut it all so abruptly. We were saddened," Vanhille said.

On any given day right now in a WCPSS school, students can been heard singing Christmas carols in classrooms and participating in holiday-themed activities. The district does not see this as a problem or indoctrination.

ABC11 did conduct a poll to see where folks stand on the district's decision to withdraw from the event. By Wednesday evening, 14 percent of viewers support the ban and 86 percent believe the students should be able to participate.