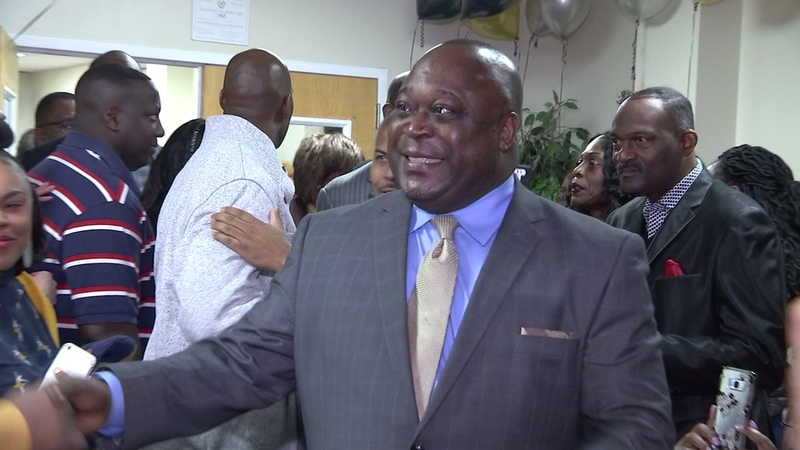 RALEIGH, N.C. (WTVD) -- It's been a whirlwind for Gerald Baker since that stunning win on election night.

Monday night at J.D. Lewis Multipurpose Center in south Raleigh, the Wake County Sheriff-elect doubled down on his intention to roll back the Wake County Sheriff's Office cooperation with federal immigration agents; no longer turning over undocumented immigrants. He also toured the Wake County Detention Center on Monday and promised changes to his supporters who've complained for years about conditions inside the jail.

At the Lewis Center, it was hugs, handshakes, impromptu dancing, and tears. It was the campaign victory party Baker didn't get 13 days ago as many thought he didn't stand a chance of winning his race against 18-year incumbent Sheriff Donnie Harrison.

"We wanted to show love for you, Gerald," said Diana Powell of Justice Served NC, holding back tears. "For just the mere fact that you stepped up to the plate."

This welcoming ceremony organized by Justice Served NC and a coalition of community advocates and activists across the county's black community who've told us they've long felt the sheriff's office left African-Americans marginalized and under-served.

Many see Baker as a change agent.

"Well he's worked (at the sheriff's office) for 28 years so he knows a lot about the department," said Nell Saunders, who said she was the county's first female African-American deputy in 1977. "(Baker) knows what needs to be done."

"It's not about white or black or brown," Baker said. "It's about right and wrong."

The sheriff-elect spoke about what he learned in his tour of the Wake Detention Center.

"We saw a lot of things that need to change," Baker said. "That begins with properly staffing that jail. It's understaffed, so you've got people down there working very hard to get the job done, but they don't have the help or support they need."

Baker beat Harrison despite having less campaign cash and a lesser public profile. Thirteen days after the upset no one saw coming, expectations are high.

"No, I'm not concerned about disappointing (my supporters)," he said. "Because the very things we ran on: integrity, accountability, community involvement, it was consistent; and people finally realized that this county needed new leadership inside the sheriff's office."

Baker will be sworn in as Wake County's new sheriff on December 3 with a lot to live up to.