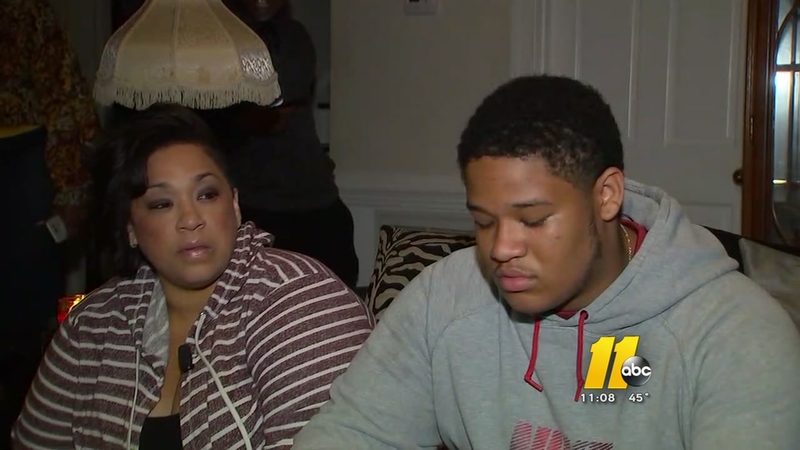 An unnerving experience for a Raleigh teen at the State Fair

RALEIGH, North Carolina (WTVD) -- A 16-year-old sophomore at Raleigh's Enloe High School said he became the victim of police brutality at a visit to the State Fair this past weekend.

Joshua Satterwhite was with his friends Saturday night, eight of them in all, when they had the run-in with a Wake County sheriff's deputy as they were exiting the fairground just before midnight.

The teen said he's been unable to forget it and his mom is demanding answers.

"I didn't think about my rights or whatever, I was thinking, am I going to leave the fair alive," Joshua said.

It all began as any typical night at the fair. But Joshua said that as he and his friends headed through the exit gates, the sheriff's deputy on duty took notice of the group.

That's when the teen's story took a violent turn.

"I had turned my back around and kept walking and maybe two to three seconds later, he was behind me and he was choking me," Joshua said.

Joshua, who plays varsity football at Enloe, said the encounter ended with the officer tackling him to the ground; tightly handcuffing his arms behind his back. Joshua said he did not resist.

"It all happened so fast. I just remember my friends' reactions. They were saying, 'get off him, what did he do? Get off him,' " Joshua recalled.

No charges were filed and Joshua was let go when he showed deputies he was only 16.

DIFFERING ACCOUNTS OF WHAT HAPPENED

She said her son returned home that night upset and distraught. And after taking him to WakeMed to get checked out for his swollen wrists and bruised leg, she filed a complaint with Internal Affairs at the sheriff's office.

That's where she heard the officer's statement and version of what happened.

"It basically said that the deputy was trying to get my son to leave and that he wouldn't leave, he kept stopping," his mother said. "The deputy grabbed him by his elbow and Josh snatched away from him."

Joshua said the officer's version is not what happened and that he never said anything disrespectful to the officer.

Community advocate Diana Powell said she suspects the case belies a systemic problem between law enforcement and the black community.

"The issue is, law enforcement has to understand you cannot go around and harass our black boys, black men. You cannot do that and think that it's OK," she said.

ABC11 contacted the Wake County Sheriff's Office to discuss the case. A spokesperson acknowledged an investigation into the incident is underway but declined to comment any further, pending the probe's results.

Satterwhite said her son was recovering from a football-related concussion when this happened and has not returned to school because he's so traumatized.