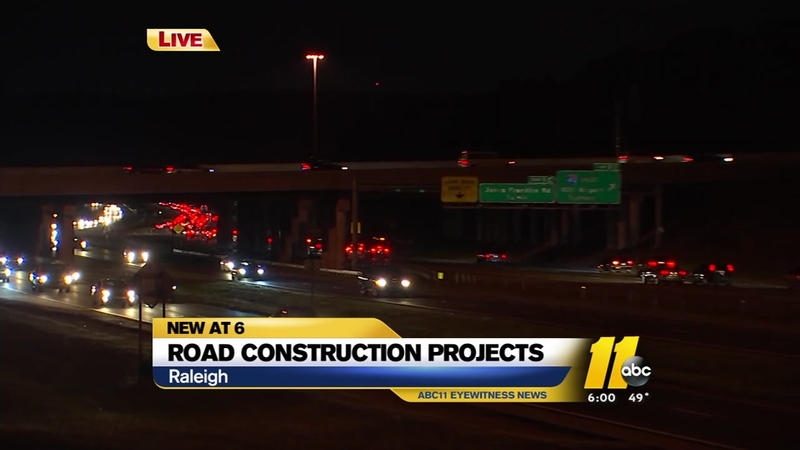 The North Carolina Department of Transportation is slated to spend more than $3 billion in the next few years fixing roads and highways in the Triangle.

The projects in development are:


The calm before the storm. Moments from now the evening rush rush hour will be in full effect at 40/440. At 6, find out how DOT is planning to alleviate traffic and other big projects on tap. #ABC11 pic.twitter.com/CQaeie2aqH

According to the DOT, the 3 major projects from the list include the I-440 widening between Walnut Street and Wade Avenue, the Triangle Expressway through southern and southeast Wake County, and the I-40 widening between I-440/U.S. 64 (exit 301) and N.C. 42 (exit 312) in Johnston County.

The projects, per NCDOT spokesperson Steve Abbott, won't start at the earliest until late 2018 with others starting in the next two to three years. Drivers should expect alternate routes and detours once construction commences.

"Think in your mind, 'OK this is going to be a pain for a little while, but when it's done, these roads are going to be much improved," Abbott said.

The most expensive project will be the "Complete 540" project in southern and southeast Wake County, with a price tag of more than $2 billion.

"That's why we plan these projects out so far," Abbott said. "So that maybe another 10,000 people moving into this area we're already going to start planning to improve roads in that area, put in new things, new infrastructure to accommodate that growth."

The traffic conditions also have many residents wondering why growth outpaces the rate at which the infrastructure is built. "You can put a development in or a shopping center in a couple of years," Abbott said. "You're not going to build a road in a couple of years. There's too many steps to go through."

For starters, the DOT needs to complete an environmental assessment followed by a review and negotiate right-of-way acquisitions with private property owners who will be directly affected by the traffic change