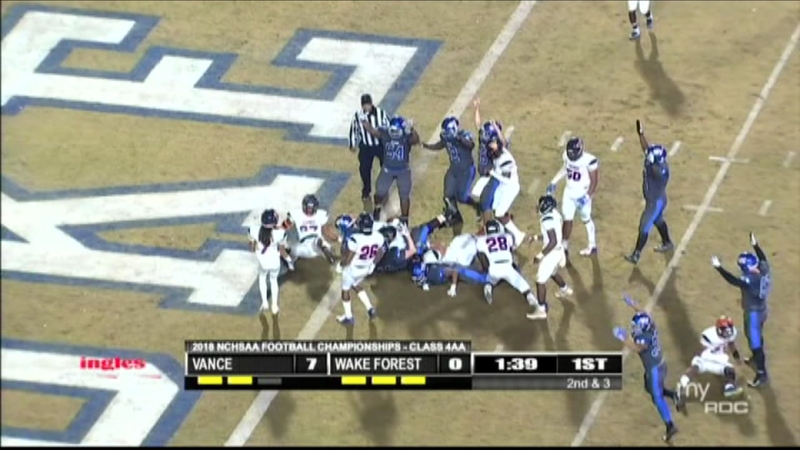 DURHAM, N.C. (WTVD) -- Wake Forest got all it could handle from Charlotte Vance but came up with a dramatic 9-7 win Friday night at Wallace Wade Stadium for the Cougars' third straight title.

With the game tied at 7 and just 42 seconds left in the fourth quarter, Wake Forest's defense made a huge play that resulted in a safety, and the margin of victory.

It wasn't easy, as the Vance Cougars, took the lead of just the second play of the game, striking for a score on a 53-yard pass.

But the Wake Forest defense clamped down, setting the tone for the rest of the game with an interception that led to the only other touchdown of a game, on a short run after a grinding drive that took almost six minutes.

The teams would battle on even terms until the deciding score. Vance, bottled up near their goal line, botched an exchange after the snap and could not get the ball out of the end zone, giving Wake Forest the stunning victory.
Report a correction or typo
Related topics:
sportswake foresthigh school football
Copyright © 2022 WTVD-TV. All Rights Reserved.
TOP STORIES
Snow likely to start around midnight, last until sunrise
Cooper vetoes bill that would push NC primary to June 7
How many times can I reuse my N95 mask?
10 injured in PA bridge collapse; human chain formed to help
Decades after TV anchor disappears, convicted rapist denies connection
LATEST: Breakthrough cases make up 37% of new COVID infections
Durham Police arrest two in Nov. shooting that left 1 dead, 2 injured
Show More
Moderna launches trial for HIV vaccine that uses mRNA technology
Durham Police make arrest in fatal hit and run
What is antisemitism? Explaining anti-Jewish ideas and hate
Holocaust survivor, great-grandson educate next generation on TikTok
Essentials to keep in your car during winter storms
More TOP STORIES News